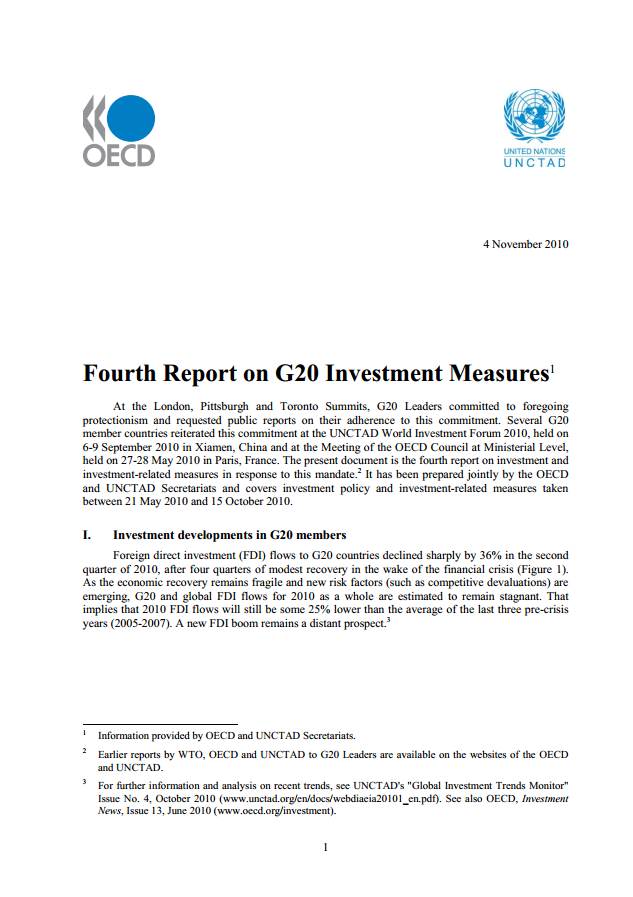 At the London, Pittsburgh and Toronto Summits, G20 Leaders committed to foregoing protectionism and requested public reports on their adherence to this commitment. Several G20 member countries reiterated this commitment at the UNCTAD World Investment Forum 2010, held on 6-9 September 2010 in Xiamen, China and at the Meeting of the OECD Council at Ministerial Level,held on 27-28 May 2010 in Paris, France. The present document is the fourth report on investment and investment-related measures in response to this mandate. It has been prepared jointly by the OECD and UNCTAD Secretariats and covers investment policy and investment-related measures taken between 21 May 2010 and 15 October 2010.

G20 members have continued to honour their pledge not to retreat into investment protectionism. On the contrary, the majority of investment measures taken during the review period carry on the trend towards investment liberalisation and facilitation.

However, these findings provide no grounds for complacency. Recent measures by some G20 emerging markets attest to these countries’ concerns about the impacts of global macroeconomic imbalances on their economies. If these imbalances and related risks for other countries are not dealt with in a credible manner, the resulting policy tensions could degenerate into a protectionist spiral. In non-financial sectors, risks of discrimination against foreign investors are still real as well. G20 Leaders will want to continue their vigilance in this area.

Managing the investment impacts of emergency measures taken in response to the crisis still constitutes a great challenge for G20 governments. These measures could be applied in a discriminatory way toward foreign investors. In addition, they pose serious threats to market competition in general and to competition operating through international investment in particular.

Governments have, in some cases, begun dismantling and unwinding emergency schemes. This process will take several years. Again in this phase, risks of protectionism may arise. Governments’ choice of the approach and timing of unwinding will determine the prevalence of these risks and thus the trust and confidence that investors will have in governments’ fairness and openness.

It remains a crucial challenge for G20 Leaders to ensure that emergency programmes are wound down as quickly as is prudent, given remaining systemic concerns and the continued fragility of the economic recovery. Assets that were acquired as a legacy of crisis-related schemes should be disposed of in a timely, non-discriminatory and open manner. Exit strategies should be transparent and accountable and should not be used as a pretext to discriminate directly or indirectly against certain investors, including foreign investors.

There are also grounds for concern that support policies are becoming an entrenched feature of the policy landscape in some countries. The fact that many emergency schemes are still operating two years after the crisis points to the political dilemmas facing governments. Although there may be a few cases where concerns about systemic stability persist, there is now a growing risk that governments are being captured by a logic for subsidisation from which it is difficult to escape. Internationally, government subsidies in one country create pressure on governments elsewhere to subsidise or shoulder the structural adjustment shifted on to them by other subsidising governments.