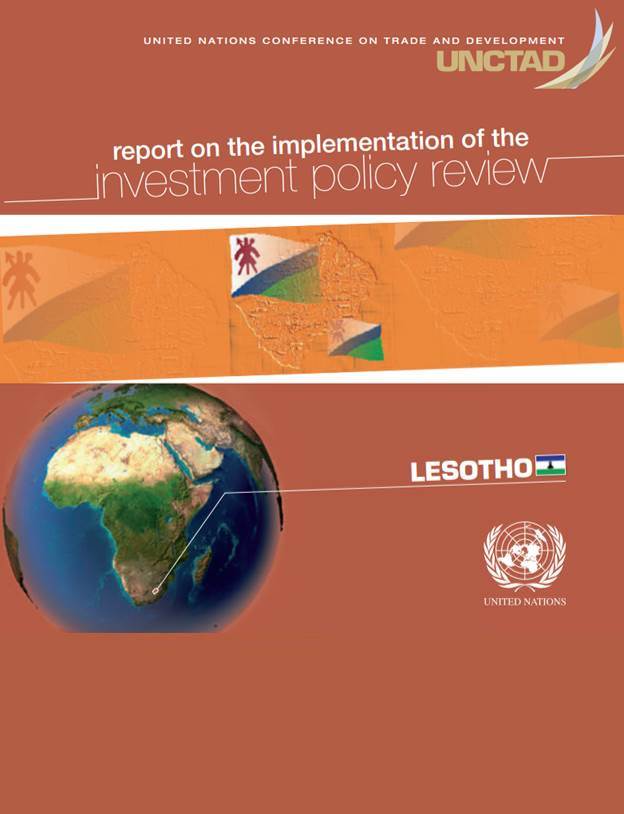 Report on the Implementation of the Investment Policy Review of Lesotho

The Investment Policy Review of Lesotho was published in 2003. The Review assessed the investment environment and sketched the building blocks of a foreign direct investment (FDI) strategy to meet the country’s development objectives. On this basis, it recommended that Lesotho strengthen its investment framework, skills base, and trade and investment infrastructure in order to improve export competitiveness and reduce reliance on trade preferences.

In 2012, the Government requested UNCTAD’s assistance in the formulation of an investment policy. An exploratory mission was conducted in May 2013, the findings of which are detailed in this report, which aims to assess progress made in implementing the recommendations set out in the Review and to inform the new investment policy.

In the 10-year period since the publication of the Investment Policy Review, the main development challenges facing Lesotho, as well as the key issues affecting its investment climate, have not significantly changed. As recognized in the Review, Lesotho is a success story among African countries for the attraction of FDI in textiles. It is one of very few countries on the continent currently exporting apparel to the United States of America. Textile manufacturing accounts for around 50 per cent of total merchandise exports (World Integrated Trade Solution database, 2013) and is the third largest source of formal employment after the public sector and South African mines.

However, the sector, and consequently the whole economy, are still heavily dependent on trade preferences and, in particular, on the third-country fabric provision of the African Growth and Opportunity Act (AGOA). The provision was extended in 2012 and is now scheduled to expire with AGOA in 2015. According to the Ministry of Trade and Industry, Cooperatives and Marketing (MTICM) of Lesotho, failure to extend the third-country fabric provision in 2012 would have put at risk 40 per cent of the textile factories and resulted in 15,000 job losses.

Already in 2003, the IPR of Lesotho recommended that uncompetitive elements in the investment climate be addressed to promote export orientation within and beyond textile manufacturing. The rationale behind this was to prepare the economy for the end of the trade preferences.
In its analysis of progress made by Lesotho in implementing the IPR, UNCTAD found that many of these recommendations remain valid and their implementation is even more urgent.