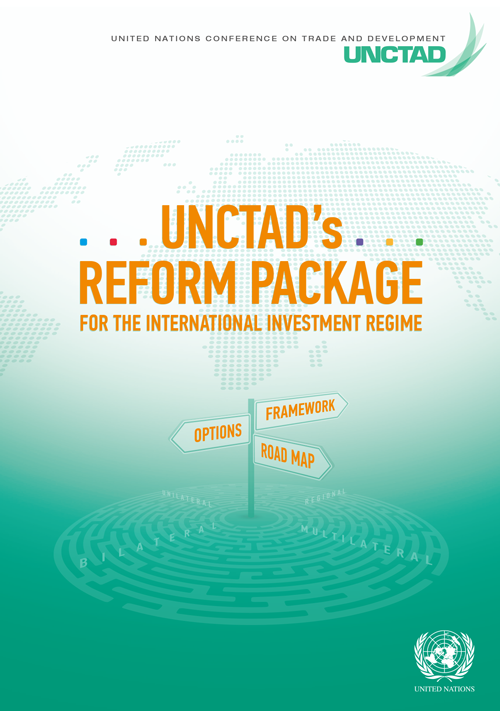 The Reform Package combines the policy options from UNCTAD’s Road Map for IIA Reform (2015) and UNCTAD’s 10 Options for Phase 2 of IIA Reform (2017) into one single document. It also builds on UNCTAD’s Investment Policy Framework for Sustainable Development (originally launched in 2012 and updated in 2015), as well as two decades of UNCTAD's policy analysis on national and international investment policymaking.

It factors in latest developments in investment treaty practice and recent debates on the reform of the IIA regime. It presents a coherent, sequenced and user-friendly tool for investment policymakers.

The Reform Package is the result of a collective effort, led by UNCTAD, pooling global expertise in the investment and sustainable development field from international organizations and numerous international experts, academics, business, practitioners and other stakeholders. It was designed as a "living" document for regular updates, in light of the new developments and advocacy for reform, with a standing invitation to the international community to exchange views, suggestions and experiences.

Different parts of the Reform Package have been field-tested in countries and were peer-reviewed at numerous high-level, multi-stakeholder meetings, including the UNCTAD Ministerial Conferences and the World Investment Forums 2012, 2014 and 2016, as well as UNCTAD’s High-Level IIA Conferences (most recently in October 2017).

In line with UNCTAD’s Road Map for Reform, great progress has been made in the five priority areas for reform (i.e. safeguarding the right to regulate while providing protection; reforming investment dispute settlement; promoting and facilitating investment; ensuring responsible investment; and enhancing systemic consistency). Close to 150 countries have used UNCTAD’s investment policy tools to formulate a new generation of investment policies.