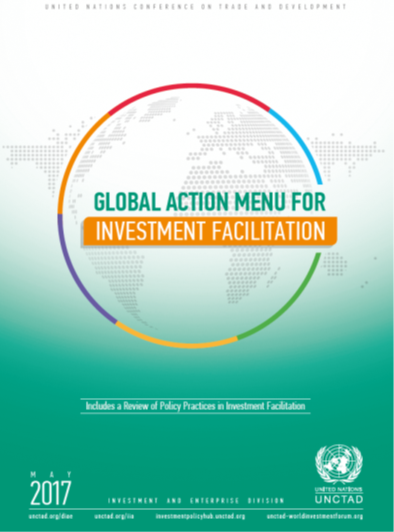 The review captures the extent to which investment facilitation practices, as set out in UNCTAD's Global Action Menu for Investment Facilitation, can be found in national and international investment policies.

Only about 20% of investment attraction measures focus on facilitation. Among investment laws, less than one fifth refer to relevant elements (i.e. one-stop shops, transparency, or dispute prevention).

In the majority of some 3'300 existing international investment agreements (IIAs), concrete investment facilitation provisions are either absent or weak.

More than a third of existing information portals contain only the minimum amount of information to qualify as business registration portals, and only about 10% of portals are complete.

This review follows the publication of the updated version of the Action Menu in September 2016, which incorporated feedback from multi-stakeholder consultations and intergovernmental processes at UNCTAD14 and the World Investment Forum. The review also highlights the key outcomes of the intergovernmental deliberations during UNCTAD's Trade and Development Board, which dedicated a full session to the Global Action Menu for Investment Facilitation in December. Delegates praised the Action Menu as a "high-quality reference document for investment facilitation policies."