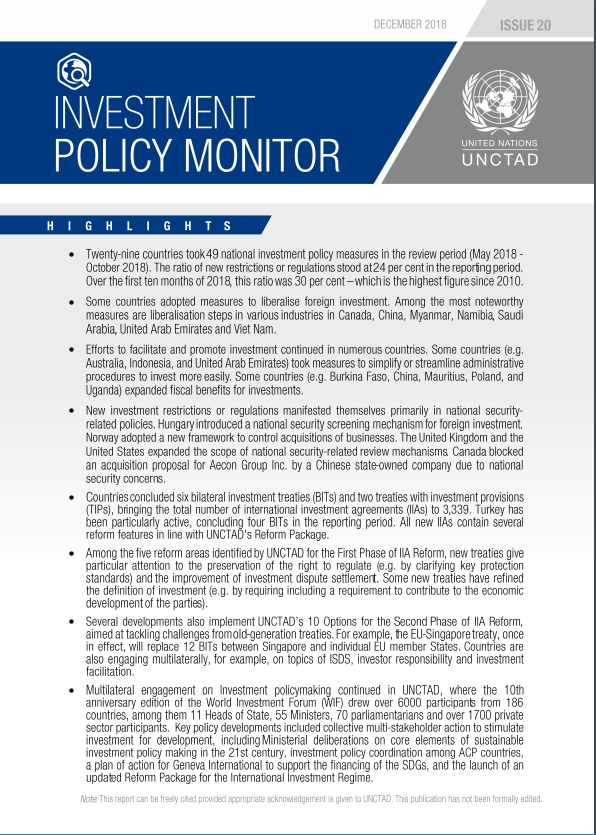 The Monitor finds that 22 countries took 32 investment policy measures between November 2017 and February 2018. The share of investment restrictions and regulations increased to 29 percent. Compared to the annual figures in recent years, this records the highest ratio since 2010.

Newly adopted restrictive investment policies include a tightening of investment screening procedures, measures to protect national security and the disapproval of some foreign takeovers.

Other restrictions relate to local content requirements and preferences for local suppliers in public procurement procedures. At the same time, some countries improved entry conditions for foreign investment.

Among the most noteworthy measures are liberalization steps in a couple of industries, the simplification of administrative procedures and new privatization. The reporting period also saw a significant corporate tax reform in one country.

In line with UNCTAD's Roadmap for IIA Reform, all new IIAs contain several reform features, giving particular attention to the preservation of the right to regulate by clarifying key protection standards and refining investor-State dispute provisions. Countries are also starting to move towards the second phase of IIA reform, modernizing the existing stock of old-generation treaties.

At the same time, several negotiations for mega-regional agreements continue. Depending on how future mega-regional treaties will interact with overlapping pre-existing ones, this can help modernize today's stock of old-generation treaties.

Multilateral discussions tackled the reform of investment dispute settlement and a number of countries are working towards structured discussions in the WTO, aimed at developing a multilateral framework on investment facilitation.