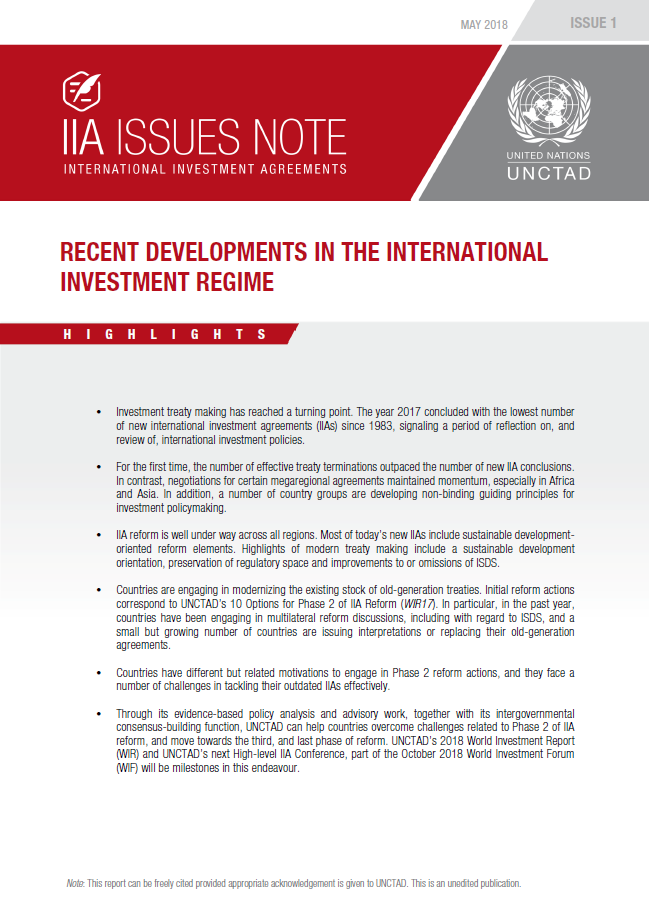 Investment treaty making has reached a turning point. The number of new international investment agreements (IIAs) concluded in 2017 (18) was the lowest since 1983. Moreover, for the first time, the number of effective treaty terminations outpaced the number of new IIAs.

IIA reform is well under way across all regions. Since 2012, over 150 countries have taken steps to formulate a new generation of sustainable development-oriented IIAs. They have reviewed their treaty networks and revised their treaty models in line with UNCTAD’s Reform Package for the International Investment Regime.

Countries are also beginning to modernize the existing stock of old-generation treaties. An increasing number are issuing interpretations, replacing and consolidating their older agreements. Many have also been engaging in multilateral reform discussions, including with regard to ISDS.

After improving the approach to new treaties and modernizing existing treaties, the last step in the reform process (Phase 3) is to ensure coherence with national investment policies and with other bodies of international law.

UNCTAD’s World Investment Report 2018, to be launched on 6 June 2018, and UNCTAD’s next High-level IIA Conference, part of the 22-26 October 2018 World Investment Forum (WIF) will both be milestones for Phase 3 of IIA Reform.