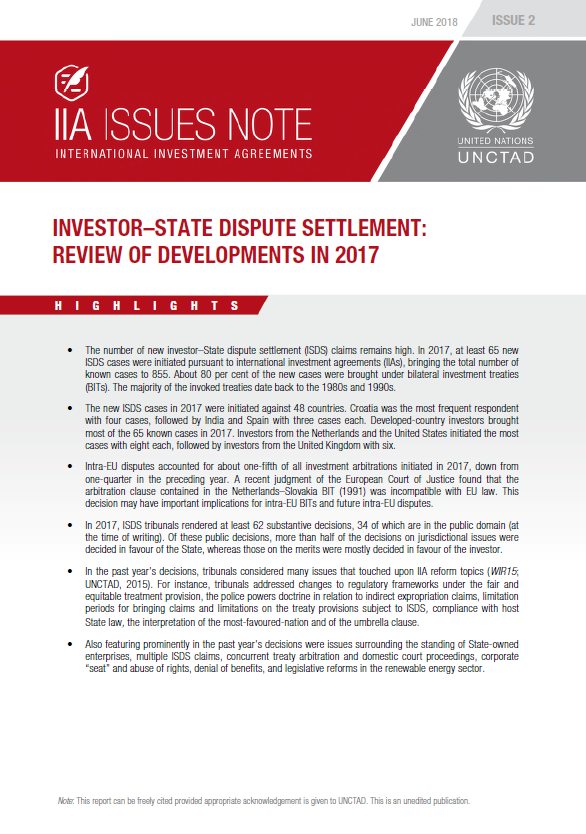 This IIA Issues Note reviews developments in treaty-based investor-State dispute settlement (ISDS) in 2017. It contains an overview of cases initiated in the past year, overall case outcomes and an in-depth analysis of arbitral decisions.

Developments in investor-State arbitrations in 2017:


The number of new ISDS claims remains high. In 2017, at least 65 new ISDS cases were initiated pursuant to international investment agreements (IIAs), bringing the total number of known cases to 855.

About 80 per cent of the new cases were brought under bilateral investment treaties (BITs). The majority of the invoked treaties date back to the 1980s and 1990s. This points to the importance of addressing the stock of “old-generation” treaties, identified by UNCTAD as a priority area for Phase 2 of IIA Reform.

Intra-EU disputes accounted for about one-fifth of all investment arbitrations initiated in 2017, down from one-quarter in the preceding year. A recent judgment of the European Court of Justice found that the arbitration clause contained in the Netherlands–Slovakia BIT (1991) was incompatible with EU law. This decision may have important implications for intra-EU BITs and future intra-EU disputes.

In the past year’s arbitral decisions, tribunals considered many issues that touched upon IIA reform topics, such as changes to regulatory frameworks under the fair and equitable treatment provision, the police powers doctrine in relation to indirect expropriation claims, limitation periods for bringing claims and limitations on the treaty provisions subject to ISDS, compliance with host State law, the interpretation of the most-favoured-nation and of the umbrella clause.