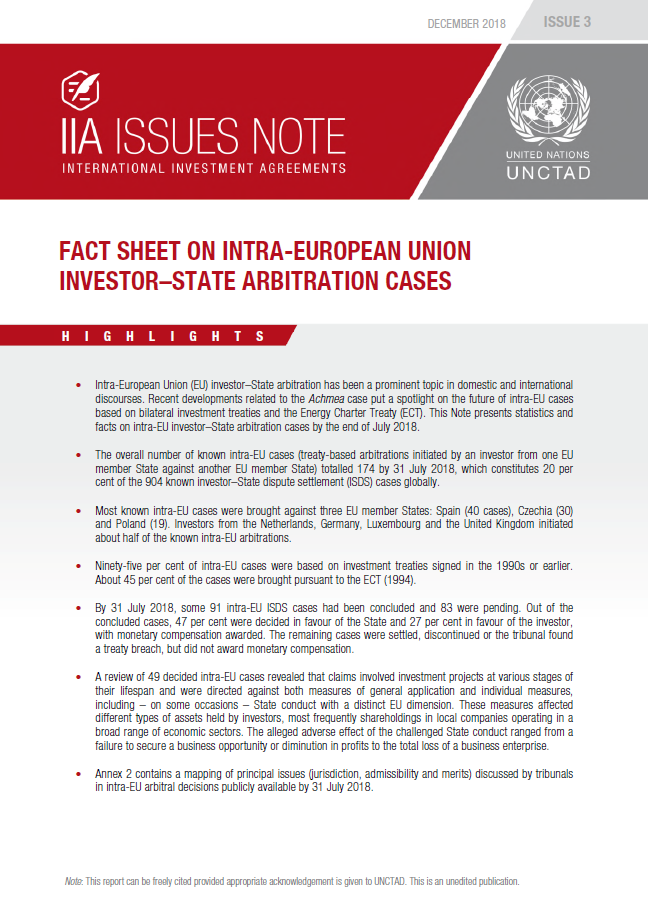 Intra-European Union (EU) investor–State arbitration has been a prominent topic in domestic and international policy debates. Recent developments related to the Achmea case put a spotlight on the future of intra-EU disputes based on bilateral investment treaties and the Energy Charter Treaty.


This IIA Issues Note presents statistics and facts on intra-EU investor-State arbitration cases by the end of July 2018.

The overall number of known intra-EU investor-State dispute settlement (ISDS) cases – treaty-based arbitrations initiated by an investor from one EU member State against another EU member State – totalled 174 by 31 July 2018, which constitutes 20 per cent of the 904 known ISDS cases globally.

Most known intra-EU cases were brought against three EU member States: Spain (40 cases), Czechia (30) and Poland (19). Investors from the Netherlands, Germany, Luxembourg and the United Kingdom initiated about half of the known intra-EU arbitrations.

Ninety-five per cent of intra-EU cases were based on investment treaties signed in the 1990s or earlier. About 45 per cent of the cases were brought pursuant to the Energy Charter Treaty (1994).

A review of 49 decided intra-EU cases provides information on the following issues: the affected investment, the types of challenged measures, the alleged rationale and the alleged adverse effects of the challenges measures. Annex 2 contains a mapping of principal issues (jurisdiction, admissibility and merits) discussed by tribunals in these cases.