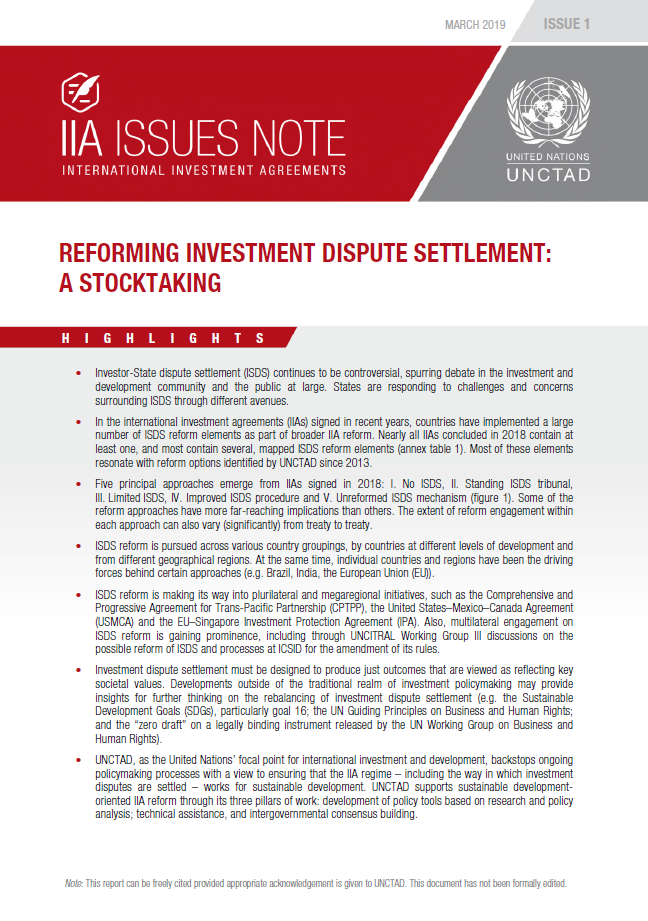 Investor-State dispute settlement (ISDS) continues to be controversial, spurring debate in the investment and development community and the public at large. States are responding to challenges and concerns surrounding ISDS through different avenues.

Taking stock of where reform stands today, this IIA Issues Note traces ISDS-related reform developments in recently concluded international investment agreements (IIAs) and in policymaking processes from the national to the multilateral level.

Nearly all IIAs concluded in 2018 contain at least one, and most contain several, ISDS reform elements, which countries have implemented as part of broader IIA reform.

ISDS reform cuts across geographical regions and countries at different levels of development. At the same time, individual countries and regions have been the driving forces behind certain approaches (e.g. Brazil, India, the EU).

ISDS reform is making its way into plurilateral and megaregional initiatives, such as the CPTPP, the USMCA and the EU–Singapore Investment Protection Agreement.

Multilateral engagement on ISDS reform is also gaining prominence, including through UNCITRAL Working Group III discussions on the possible reform of ISDS and processes at ICSID for the amendment of its rules.

Investment dispute settlement must be designed to produce just outcomes that are viewed as reflecting key societal values. Developments outside of the traditional realm of investment policymaking may provide insights for further thinking in this direction.