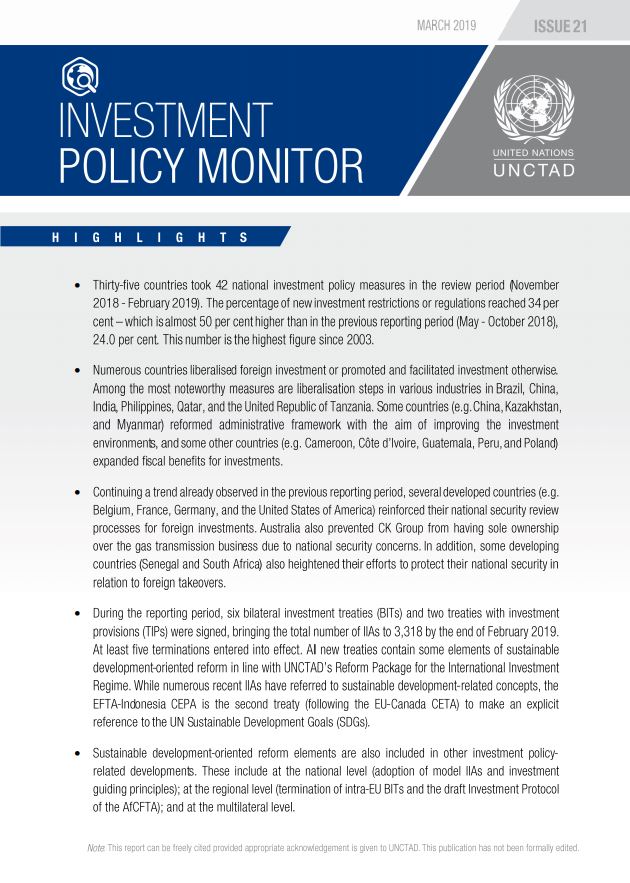 The new Monitor finds that 35 countries took 42 investment policy measures from November 2018 to February 2019. The percentage of new investment restrictions or regulations reached 34 percent during the review period, which is the highest figure since 2003. The ratio rose almost 50 per cent compared with the previous reporting period (May - October 2018).

At the same time, numerous countries improved business conditions for foreign investment - with developing and transition economies taking the lead. Among the most noteworthy measures are liberalization steps in some industries, the reform of administrative frameworks and the expansion of fiscal incentives for investments.

Regarding international investment treaties, the Monitor finds that six BITs and two TIPs were signed, bringing the total number of IIAs to 3,318 by the end of February 2019. At least five terminations entered into effect. All new treaties contain some elements of sustainable development-oriented reform in line with UNCTAD’s Reform Package for the International Investment Regime. While numerous recent IIAs have referred to sustainable development-related concepts, the EFTA-Indonesia CEPA is the second treaty to make an explicit reference to the UN SDGs.

Sustainable development-oriented reform elements are also included in other investment policy-related developments. These include developments at the national level (adoption of model IIAs and investment guiding principles); at the regional level (termination of intra-EU BITs and the draft Investment Protocol of the AfCFTA); and at the multilateral level.