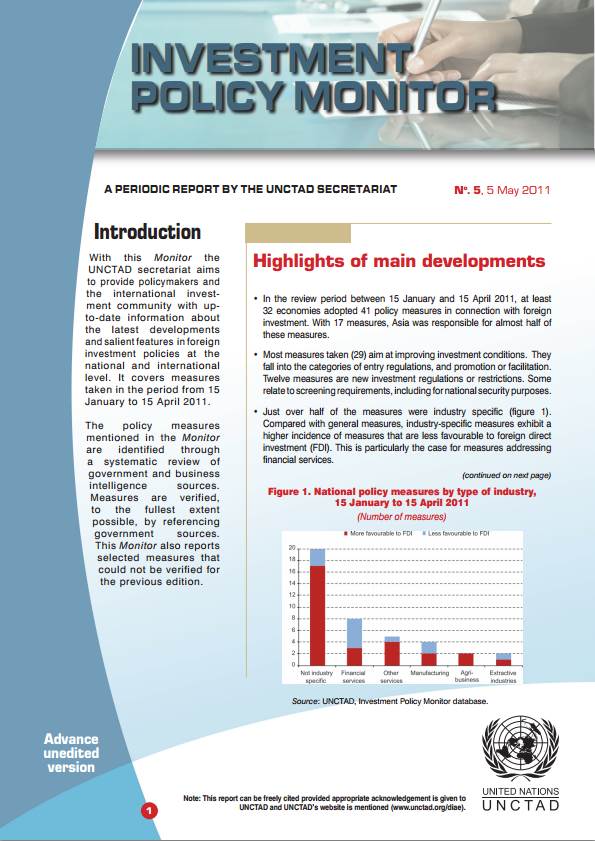 In the review period between 15 January and 15 April 2011, at least 32 economies adopted 41 policy measures in connection with foreign investment. With 17 measures, Asia was responsible for almost half of these measures.

Most measures taken (29) aim at improving investment conditions. They fall into the categories of entry regulations, and promotion or facilitation. Twelve measures are new investment regulations or restrictions. Some relate to screening requirements, including for national security purposes.

Just over half of the measures were industry specific (figure 1). Compared with general measures, industry-specific measures exhibit a higher incidence of measures that are less favourable to foreign direct investment (FDI). This is particularly the case for measures addressing financial services.

Among the measures are:

While four of the BITs concluded during the reporting period involve European Union (EU) member States, the process of defining the contours of future EU IIAs continued. The European Parliament adopted a Resolution addressing the substance of future EU IIAs, suggesting, amongst others to include social and environmental standards into IIAs and to protect the right to regulate.

In its April 2011 trade policy statement, the Government of Australia announced that it would stop including investor-State dispute settlement (ISDS) clauses into its future IIAs.