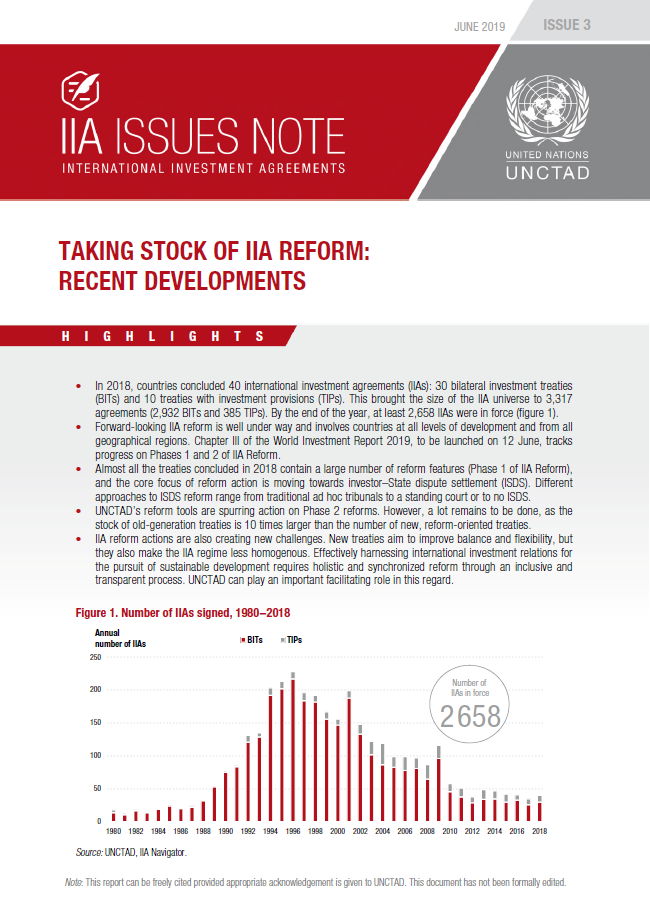 Forward-looking IIA reform is well under way and involves countries at all levels of development and from all geographical regions.

- In 2018, countries concluded 40 international investment agreements, bringing the size of the IIA universe to 3,317 agreements. By the end of the year, at least 2,658 IIAs were in force.

- Almost all the treaties concluded in 2018 contain a large number of reform features (Phase 1 of IIA Reform), and the core focus of reform action is moving towards investor–State dispute settlement (ISDS). Different approaches to ISDS reform range from traditional ad hoc tribunals to a standing court or to no ISDS.

- UNCTAD’s reform tools are spurring action on Phase 2 reforms. However, a lot remains to be done, as the stock of old-generation treaties is 10 times larger than the number of new, reform-oriented treaties.

Effectively harnessing international investment relations for the pursuit of sustainable development requires holistic and synchronized reform through an inclusive and transparent process. UNCTAD can play an important facilitating role in this regard.

Chapter III of the World Investment Report 2019, to be launched on 12 June, analyses trends in newly signed IIAs and takes stock of IIA Reform.