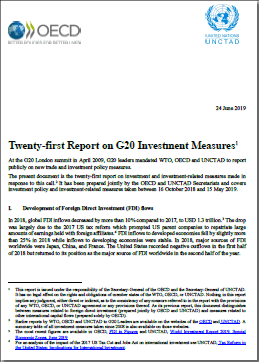 The joint UNCTAD-OECD Report, released today, reveals that G20 members' attention to investment policies designed to safeguard essential security interests continued to grow, following a trend that began in early 2018 and extends beyond the G20 membership. Most changes in this policy area are driven by a heightened awareness and concerns over threats associated with sensitive personal data or the acquisition of advanced technology with dual-use applications.

The uncertainty generated by current trade tensions is likely to discourage capital spending. However, the impact of those developments on international investment is likely to be diverse and specifics are difficult to predict: trade barriers could lead to reallocation of investment to locations not directly affected by those measures, or a further decline in global foreign investment if trade and related frictions lead to a global economic slowdown.

The potential impact of new policies and their implementation on cross-border investment flows calls for a close monitoring of these policy developments and continuous multilateral dialogue, as is already taking place at the OECD and UNCTAD.