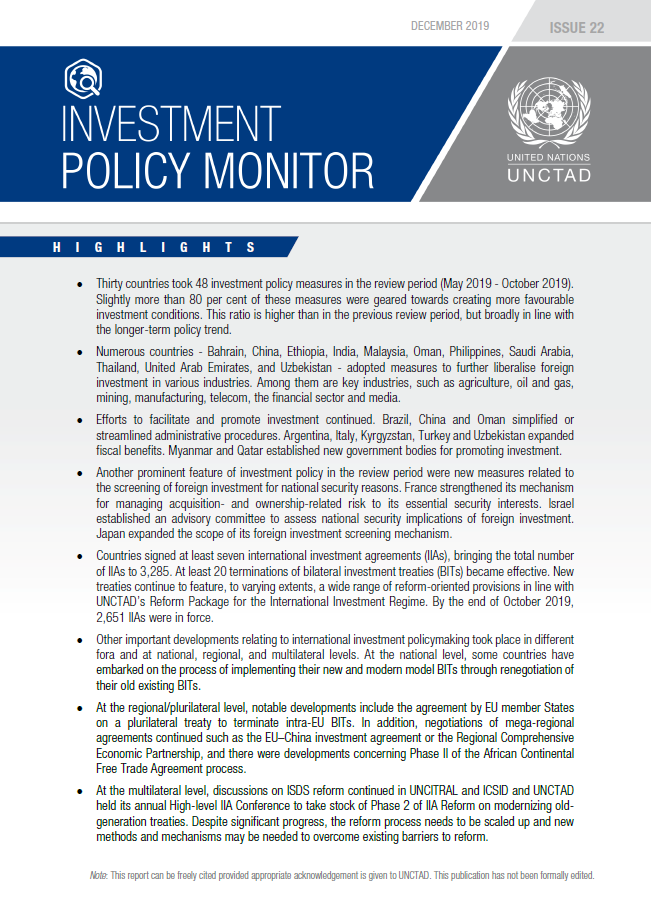 Slightly more than 80 per cent of these measures were geared towards creating more favourable investment conditions. While this ratio is higher than in the previous review period, it is broadly in line with the longer-term policy trend.

Among the most noteworthy measures are liberalization steps in various key industries, the simplification of administrative procedures and the expansion of fiscal incentives for investments. Most of these measures were taken by developing countries and transition economies.

Newly adopted restrictions or regulations for foreign investors continued to be mainly based on national security concerns about foreign ownership of critical infrastructures, core technologies, or other sensitive assets. All such measures were adopted by advanced economies during the review period.

The Monitor finds that seven international investment agreements (IIA) were signed, bringing the total of IIAs to 3,285. At least, 20 terminations of bilateral investment treaties (BITs) became effective. By end of October 2019, at least 2,651 IIAs were in force.

International investment policymaking continues to take place in different fora and at several levels. Notable is the drive towards sustainable development-oriented IIA reform in line with UNCTAD's policy tools. This is evident from the large number of reform features included in new treaties, the increasing activities of States to modernize old-generation treaties by, among others, replacing them with new agreements, and the mainstreaming of reform efforts in multilateral fora, notably with respect to reforming investor-State dispute settlement (e.g. ICSID, UNCITRAL).