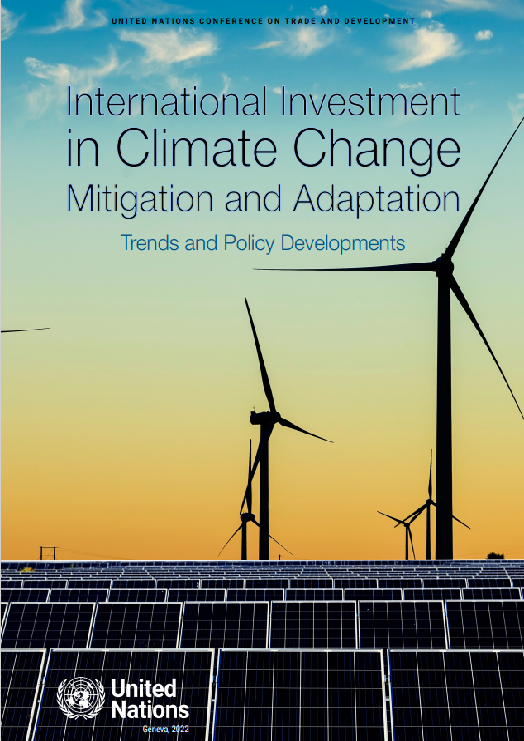 The report brings together the key findings of several recent research monitors, including a Special Issue of the Global Investment Trends Monitor (GITM no. 43) on climate change investment trends, a Special Issue of the Investment Policy Monitor (IPM no. 9) on national investment policy developments relevant to climate change, and two IIA Issues Notes on climate-related developments in international investment agreements and investor-State dispute settlement.

The report further incorporates key findings from the World Investment Report 2022, insights from the intergovernmental debate during the Multi-Year Expert Meeting on Investment and Climate Change held in October 2022, and elements from the G20 Compendium on Promoting Investment for Sustainable Development, prepared by UNCTAD under the guidance of the Indonesian presidency of the G20.

Some of the highlights:

Investment in climate change mitigation and adaptation risks a temporary setback. Worsening financial conditions and investor uncertainty caused by the war and the effects of multiple crises are putting downward pressure on all cross-border investment. Although the search for solutions to the energy crisis has raised hopes for a faster transition to green energy, the first signals are that climate change investment will not escape the short-term FDI slump.

In climate change mitigation sectors, the number of new project announcements in the first three quarters of 2022 was 7 per cent lower than in 2021. In adaptation sectors it was 12 per cent lower. Urgent action is needed for international investment to return to its growth path.

The need for climate action has added urgency to the reform of the international investment agreements (IIA) regime. The risk of investor-State dispute settlement (ISDS) being used to challenge climate policies is a major concern. IIAs should be made more climate-responsive, most importantly by safeguarding the right and duty of States to regulate in the public interest.