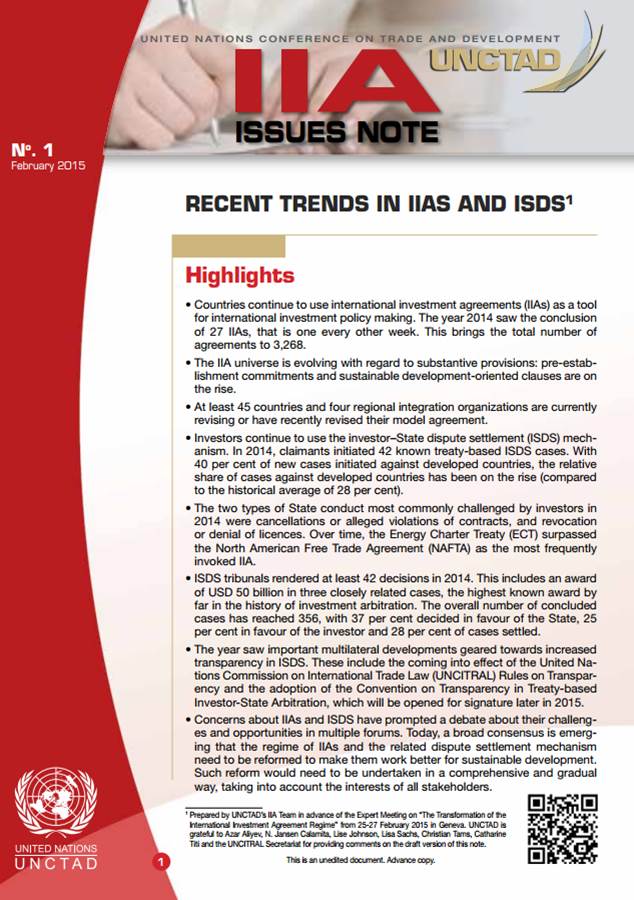 Countries continue to use IIAs as a tool for international investment policy making. The year 2014 saw the conclusion of 27 IIAs, that is, one every other week. This brings the total number of agreements to 3,268. At least 45 countries and four regional integration organizations are currently revising or have recently revised their model agreement. The IIA universe is evolving with regard to substantive provisions: pre-establishment commitments and sustainable development-oriented clauses are on the rise.
Investors continue to use the ISDS mechanism. In 2014, claimants initiated 42 known treaty-based ISDS cases. With 40 per cent of new cases initiated against developed countries, the relative share of cases against developed countries has been on the rise (compared to the historical average of 28 per cent).

The two types of State conduct most commonly challenged by investors in 2014 were cancellations or alleged violations of contracts, and revocation or denial of licences. The Energy Charter Treaty (ECT) surpassed the North American Free Trade Agreement (NAFTA) as the most frequently invoked IIA. ISDS tribunals rendered at least 42 decisions in 2014. This includes an award of USD 50 billion in three closely related cases, the highest known award by far in the history of investment arbitration. The overall number of concluded cases has reached 356, with 37 per cent decided in favour of the State, 25 per cent in favour of the investor and 28 per cent of cases settled.

The year saw important multilateral developments geared towards increased transparency in ISDS. These include the coming into effect of the United Nations Commission on International Trade Law (UNCITRAL) Rules on Transparency and the adoption of the Convention on Transparency in Treaty-based Investor-State Arbitration, which will be opened for signature later in 2015.

Concerns about IIAs and ISDS have prompted a debate about their challenges and opportunities in multiple forums. Today, a broad consensus is emerging that the regime of IIAs and the related dispute settlement mechanism need to be reformed to make them work better for sustainable development. Such reform would need to be undertaken in a comprehensive and gradual way, taking into account the interests of all stakeholders.