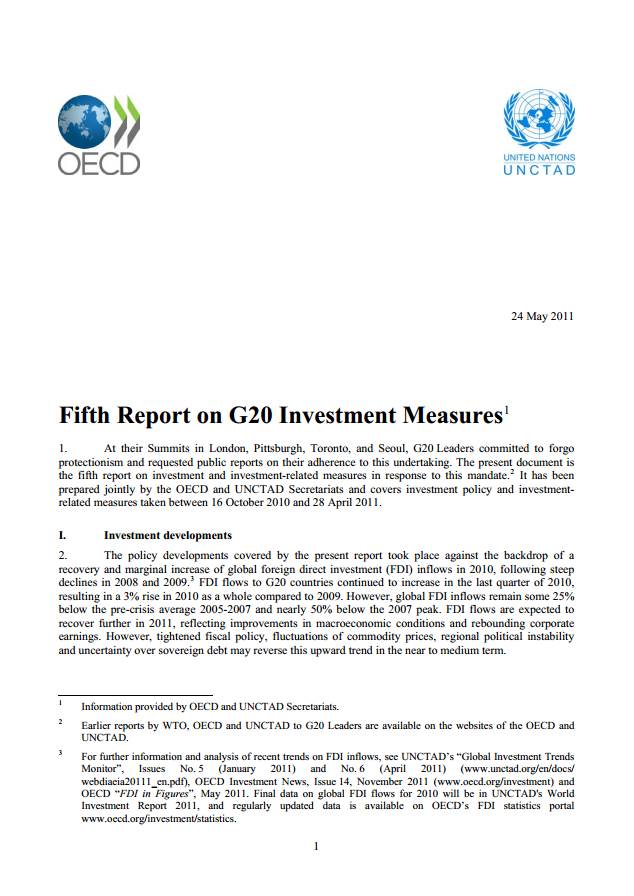 At their Summits in London, Pittsburgh, Toronto, and Seoul, G20 Leaders committed to forgo protectionism and requested public reports on their adherence to this undertaking. The present document is the fifth report on investment and investment-related measures in response to this mandate.2 It has been prepared jointly by the OECD and UNCTAD Secretariats and covers investment policy and investment-related measures taken between 16 October 2010 and 28 April 2011.

On the whole, G20 members have continued to honour their pledge not to retreat into investment protectionism. The majority of investment policy measures taken during the reporting period show continued moves towards eliminating restrictions to international capital flows and improving clarity for investors. However, there have also been a few instances of new restrictions. These measures consisted, in one instance, of a tightening of existing capital controls. One country took measures relating to security-related reviews of foreign investment proposals.

With respect to emergency measures, the dismantling of support schemes and the unwinding of assets and liabilities continued. In line with earlier findings, this report shows that most emergency measures and their dismantling did not overtly discriminate against foreign investors. They nevertheless pose concerns for investment policy makers because they involve government interventions that influence global investment patterns in sectors such as finance and automobiles.

G20 members continue to conclude international investment agreements (IIAs) to attract foreign investment, and work towards greater predictability and sophistication of these IIAs and related areas such as investor-State dispute settlement systems.

The parallel efforts to liberalise and regulate foreign investment at the national and international levels show that policy makers in G20 countries are aware of the role of international investment in supporting sustainable development and prosperity. Activities in the framework of the G20 “Multi-Year Action Plan on Development” also contribute to harnessing investment for these objectives.