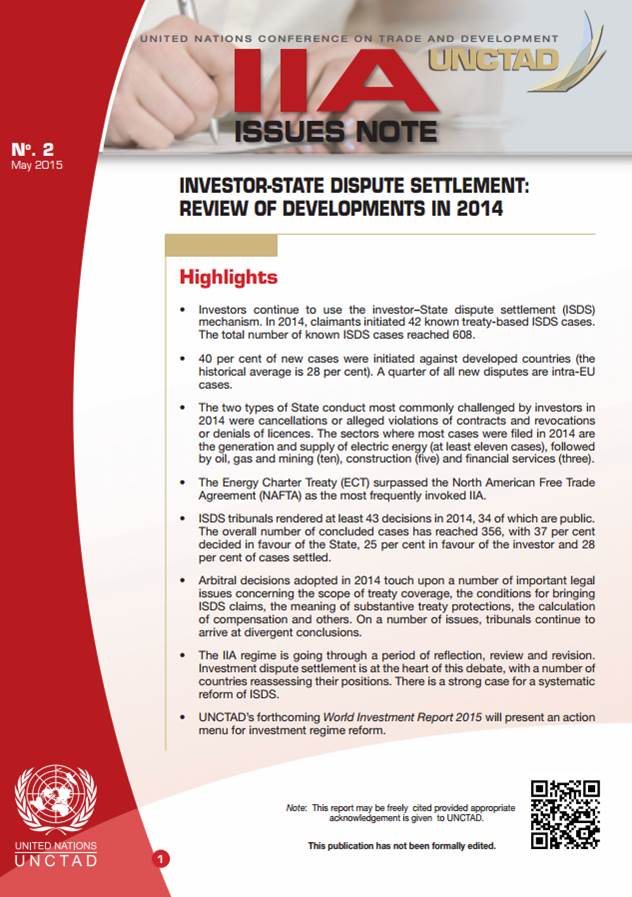 Investor-State dispute settlement (ISDS) is a highly controversial issue, with a number of countries currently reassessing their positions. To inform and facilitate this debate, UNCTAD provides up-to-date statistical information as well as reviews decisions issued by arbitral tribunals in the course of the past year.

Investment arbitrations against host countries continued to grow in 2014, albeit at a slower pace than in the three previous years. Forty-two new known cases were initiated, while the total number of known treaty-based cases reached 608. Forty per cent of new cases are against developed countries, which is 12 percent higher than the historical average.

The sectors where most cases were filed in 2014 are the generation and supply of electric energy, followed by oil, gas and mining, construction and financial services. The two types of State conduct most commonly challenged by investors last year were cancellations or alleged violations of contracts and revocations or denials of licences.

Investor-State tribunals issued at least 43 decisions in 2014, 34 of which are in the public domain. The overall number of concluded cases has reached 356, with 37 per cent decided in favour of the State, 25 per cent in favour of the investor and 28 per cent of cases settled.

Arbitral decisions rendered in 2014 touch upon a number of important legal issues concerning the scope of treaty coverage, the conditions for bringing ISDS claims, the meaning of substantive treaty protections, the calculation of compensation and others. On a number of issues, tribunals continue to arrive at divergent conclusions.