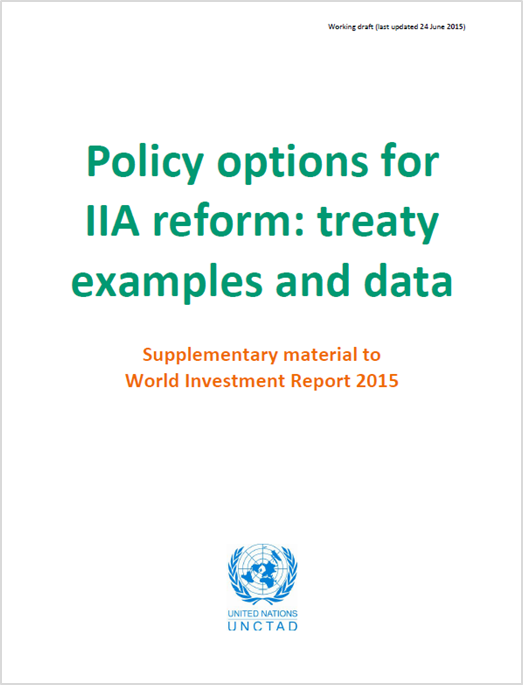 The IIA regime is going through a period of reflection, review and revision. A heated public debate is taking place in many countries, and a shared view is emerging on the need for reform of the IIA regime to ensure that it works for all stakeholders.

Policy options discussed in Chapter IV are listed in this document, offering selected treaty examples and, where available, data on the prevalence of the reform option in treaty practice. Sample treaty formulations can also be found in the APEC-UNCTAD Handbook for IIA Negotiators (2012).

Treaty elements are currently limited to those discussed in section IV.B.3(a) of the WIR 2015 and are ordered to match the typical structure of an IIA. This is work-in-progress subject to possible revisions and updating.

- Scope of the treaty

Treaty examples include those from (i) IIAs concluded to date (regardless of whether they have entered into force), (ii) draft IIAs, and (iii) model IIAs. Within the group of concluded IIAs, examples appear in reverse chronological order.

Preliminary data on the prevalence of reform options is provided where available. It is based on the mapping of IIAs by law students from universities worldwide, with general guidance from UNCTAD and under the supervision of law professors. While every effort has been made to ensure accuracy, it cannot be guaranteed.

The large treaty sample consists of 868 IIAs (BITs and “other IIAs”) signed between 1962 and 2011, by countries of different levels of development and located in different regions of the world. The small sample (“recent IIAs”) consists of all 61 IIAs signed between 2012 and 2014, for which texts are available as of mid-May 2015. Draft treaties and model treaties have not been taken into account when calculating percentages. All available treaty texts can be found in UNCTAD’s IIA Database.

The underlying analysis of treaty provisions is not exhaustive or official, does not affect the rights and obligations of the contracting parties and is not intended to provide any authoritative or official legal interpretation.