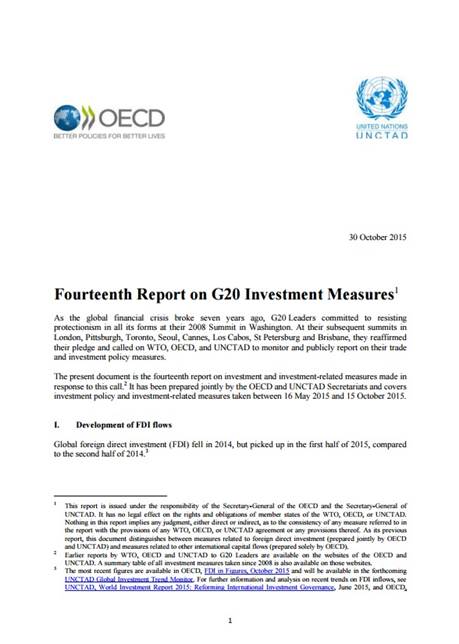 The report indicates that G20 members have refrained from raising new barriers to investment as reiterated in their commitment at the Brisbane summit in 2014. Almost all of the investment policy changes introduced by G20 members between mid-May 2015 and mid-October 2015 enhanced openness for international investment, the report finds. The findings were prepared by UNCTAD and the OECD and are part of a wider report on trade and investment measures in the G20 issued periodically by UNCTAD, the OECD and the WTO.

The joint UNCTAD-OECD report confirms the long term trend since the monitoring of G20 policy measures began in 2009; expressed in numbers, well over 80 per cent of newly taken measures specific to foreign direct investment were liberalizingin nature.

Beyond their commitment to standstill, the report invites G-20 Leaders to consider ways and means to effectively promote investment to boost global economic growth, trade, employment and sustainable development. There is a need for G-20 collective leadership in this regard.