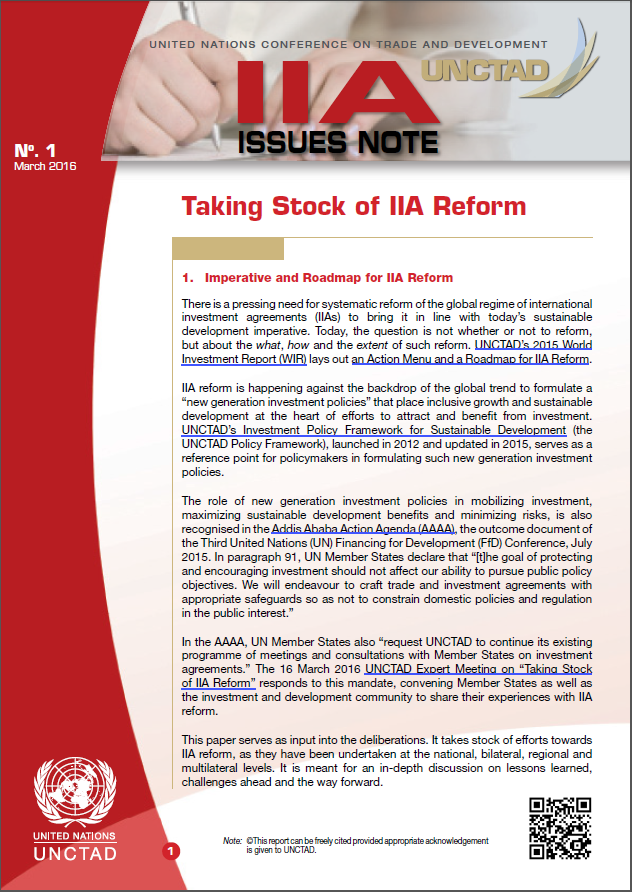 There is a pressing need for systematic reform of the international investment agreements (IIAs) regime to bring it in line with today's sustainable development imperative. Today the question is not whether or not to reform, but about the what, how and extent of such reform.

A preliminary stocktaking of IIA Reform suggests that efforts towards a more sustainable-development-friendly IIA regime are being undertaken at all levels of governance. UNCTAD's latest IIA Issues Note on "Taking stock of IIA Reform" documents that:

IIA reform is a formidable challenge. Significant progress has been made, but much remains to be done. Comprehensive reform requires a two-pronged approach: modernizing existing treaties and treaty models and formulating new ones. Only a common approach, at all levels, bilateral, regional, multilateral as well as national will deliver an IIA regime, in which stability, clarity and predictability help achieve the objectives of all stakeholders: effectively harnessing international investment relations for the pursuit of sustainable development.

UNCTAD has been advocating for IIA reform since 2010. Based on UNCTAD’s long-standing experience with its Work Programme on IIAs, UNCTAD's World Investment Report series 2010-2015 highlighted a myriad of challenges and options for reforming various aspects of the IIA regime. UNCTAD's mandate to continue this endeavor was recently confirmed in the Addis Ababa Action Agenda (AAAA) of the Third United Nations Financing for Development Conference, July 2015. UNCTAD stands ready to continue providing the investment and development community with the necessary backstopping in this regard.