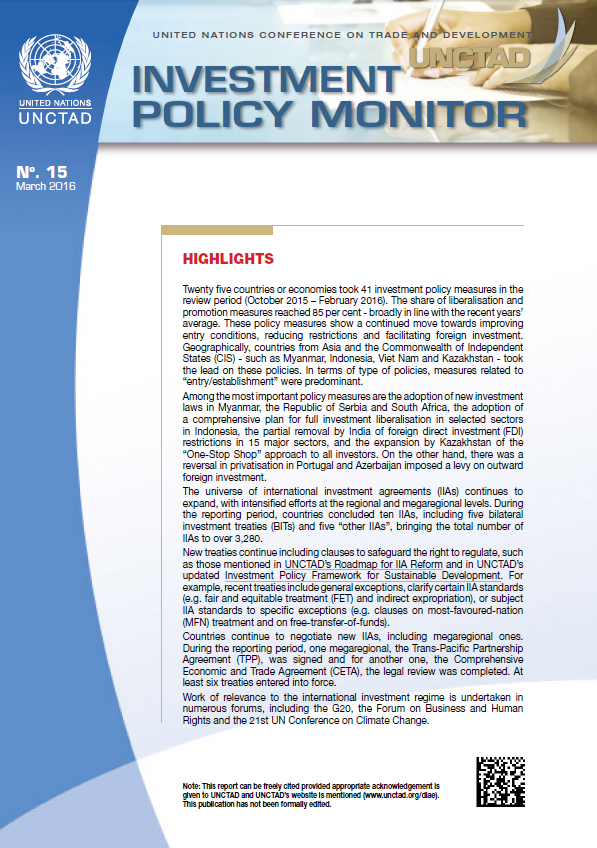 The Monitor finds that 25 countries took 41 investment policy measures between October 2015 and February 2016. The share of liberalization and promotion measures was 85 per cent - broadly in line with last years' average.

These policy measures show a continued move towards improving entry conditions, reducing restrictions and facilitating foreign investment. Geographically, countries from Asia and the Commonwealth of Independent States (CIS) - such as Indonesia, Kazakhstan, Myanmar, Viet Nam and - took the lead on these policies. In terms of policy types, measures related to "entry/establishment" were predominant.

Among the most important policy measures are the adoption of new investment laws in Myanmar, the Republic of Serbia and South Africa, the adoption of a comprehensive plan for full investment liberalization in selected sectors in Indonesia, the partial removal by India of foreign direct investment (FDI) restrictions in 15 major sectors, and the expansion by Kazakhstan of the "One-Stop Shop" approach to all investors.

Regarding international investment policies, UNCTAD found that countries concluded ten new international investment agreements (IIAs), bringing the total number of IIAs to over 3,280 at the end of February 2016. The new treaties are five bilateral investment treaties (BITs) and five "other IIAs", including the Trans-Pacific Partnership (TPP). At least six IIAs entered into force. Countries also continued to negotiate new IIAs, including megaregional ones.

New treaties continue to include provisions safeguarding the right to regulate while protecting investment, as well as other elements mentioned in UNCTAD’s Roadmap for IIA Reform and in UNCTAD’s updated Investment Policy Framework for Sustainable Development.