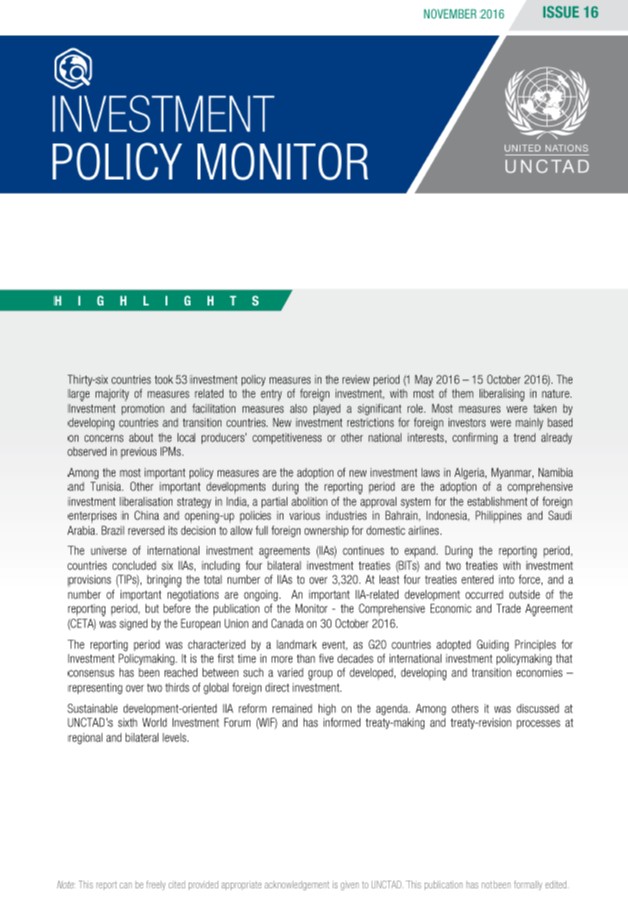 The Monitor finds that 36 countries took 53 investment policy measures between 1 May 2016 and 15 October 2016. The share of liberalization, promotion and facilitation measures during this period was 74 per cent, which is lower than the average in recent years.

These policy measures show a continued move towards improving entry conditions, reducing restrictions and facilitating foreign investment. Most measures were taken by developing countries and transition countries. New investment restrictions for foreign investors were mainly based on concerns about the local producers' competitiveness or other national interests.

Among the most important policy measures are the adoption of new investment laws in Algeria, Myanmar, Namibia and Tunisia. Other important developments during the reporting period are the adoption of a comprehensive investment liberalisation strategy in India, the replacement of the approval system by the filing system for the establishment of foreign enterprises in China and opening-up policies in various industries in Bahrain, Indonesia, Philippines and Saudi Arabia. As regards new regulations or restrictions, Brazil reversed its decision to allow full foreign ownership for domestic airlines.

Regarding international investment policies, countries concluded six international investment agreements (IIAs), bringing the total number of IIAs to over 3,320. At least four treaties entered into force, and a number of important negotiations are ongoing. An important IIA-related development occurred - the Comprehensive Economic and Trade Agreement (CETA) was signed by the European Union and Canada on 30 October 2016.

The reporting period was characterized by a landmark event, as G20 countries adopted Guiding Principles for Global Investment Policymaking. It is the first time in more than several decades of international investment policymaking that consensus has been reached between such a varied group of developed, developing and transition economies – representing over two thirds of global foreign direct investment.

Sustainable development-oriented IIA reform remained high on the agenda. Among others it was discussed at UNCTAD's sixth World Investment Forum (WIF) and has informed treaty-making and treaty-revision processes at regional and bilateral levels.