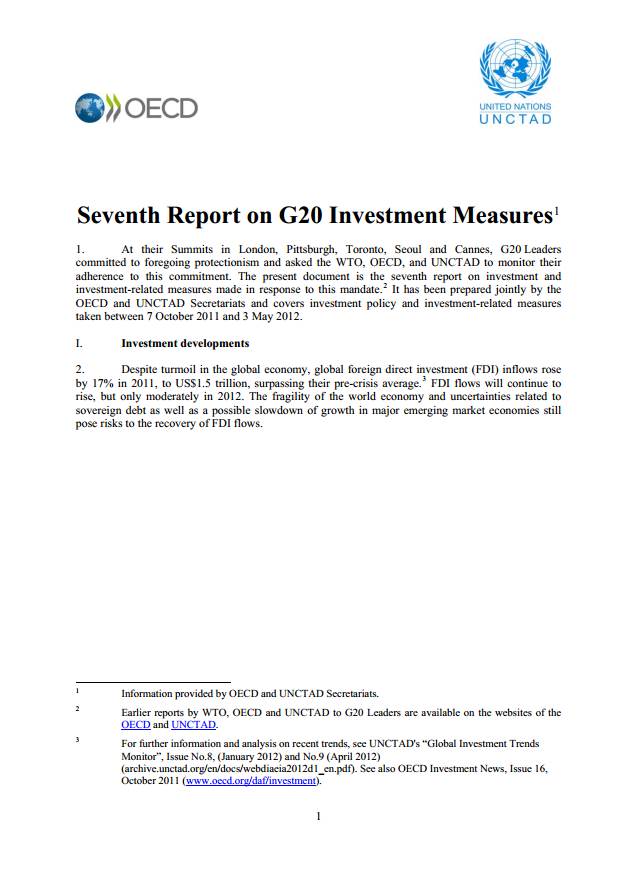 At their Summits in London, Pittsburgh, Toronto, Seoul and Cannes, G20 Leaders committed to foregoing protectionism and asked the WTO, OECD, and UNCTAD to monitor their adherence to this commitment. The present document is the seventh report on investment and investment-related measures made in response to this mandate.2 It has been prepared jointly by the OECD and UNCTAD Secretariats and covers investment policy and investment-related measures taken between 7 October 2011 and 3 May 2012.

As in past reports, this current reporting period shows that some G20 governments were very active in this policy field, while others took few or no measures. As in earlier reporting periods, emerging economies among G-20 member countries took more investment measures than developed country G20 members. Most measures had the effect of opening up markets and increasing policy transparency for investors. For the most part, hence, G-20 member countries have continued to honour their pledge not to retreat into investment protectionism.

However, there are also some important exceptions to the trend toward liberalisation, relating, notably, to an expropriation, a divestment requirement and new entry restrictions. It is important in this context to re-emphasize that States have the sovereign right to regulate or restrict foreign investment, subject to certain conditions as stipulated by the domestic law of the host State and its obligations under international law. Such measures, if taken in a manner consistent with domestic legal requirements and international law, can be a legitimate means to further certain policy objectives. However, new restrictive measures can also heighten perceptions of risk for business, which can be particularly troublesome at a time when investors are already on edge due to broader economic and political turbulence.

Countries should also consider carefully whether FDI restrictions are the most effective way of achieving legitimate public policy goals. The key challenge remains how to attract foreign investment and to make it work for sustainable development and inclusive growth. Furthermore, broader concerns about global macroeconomic turbulence and financial sector stability are best taken care of by progress in strengthening the international macro-prudential policy framework.