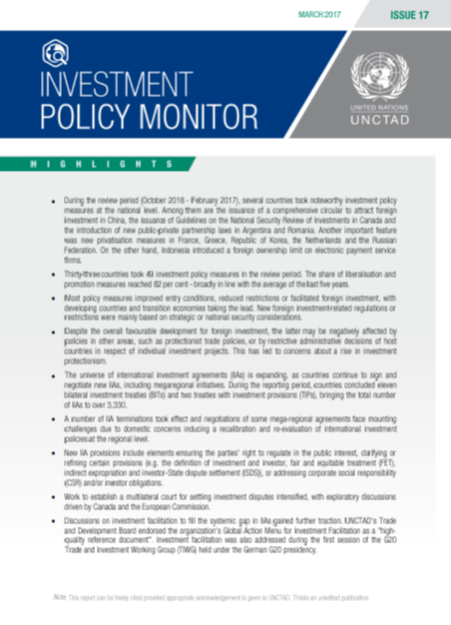 The Monitor finds that 33 countries took 49 investment policy measures between October 2016 and February 2017. Most of them improved entry conditions or promoted and facilitated foreign investment, with developing countries and transition economies taking the lead. New foreign investment-related regulations or restrictions were mainly based on strategic or national security considerations.

Among the notable policy measures are the issuance of a comprehensive circular to attract foreign investment in China and the introduction of new public-private partnership laws in Argentina and Romania. Another important feature was new privatisation measures in France, Greece, Republic of Korea, the Netherlands and the Russian Federation. Indonesia introduced a foreign ownership limit on electronic payment service firms, and Canada issued Guidelines on the National Security Review of Investments.

Foreign investment may be negatively affected by policies in other areas, such as protectionist trade policies, or by restrictive administrative decisions of host countries in respect of individual investment projects. This has led to concerns about a rise in investment protectionism.

During the reporting period, work to establish a multilateral court for settling investment disputes intensified, with exploratory discussions driven by Canada and the European Commission. Discussions on investment facilitation to fill the systemic gap in IIAs gained further traction. UNCTAD's Trade and Development Board requested the Secretariat to widely disseminate the organization's Global Action Menu for Investment Facilitation, including through its technical assistance.