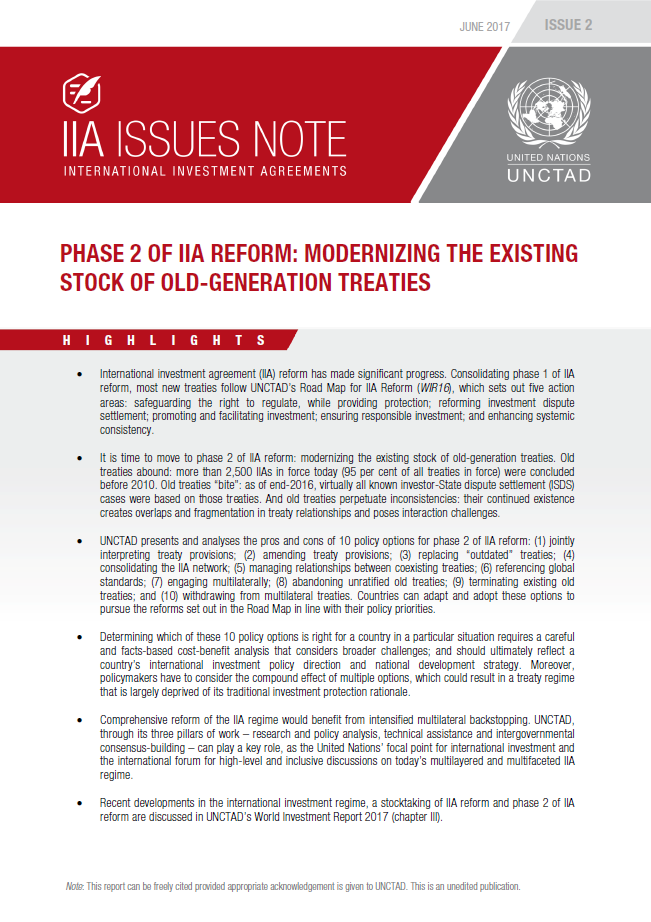 IIA reform has made significant progress, with most new treaties following UNCTAD’s Road Map for IIA Reform (phase 1 of IIA reform). However, much work remains to be done to modernize the existing stock of "old-generation" IIAs (phase 2 of IIA reform).

Several arguments speak for embarking on phase 2 of IIA reform. Old treaties abound: more than 2,500 IIAs in force today were concluded before 2010 (95 per cent of all treaties in force); old treaties “bite”: as of end-2016, most known investor-State dispute settlement cases were based on those treaties; and old treaties perpetuate inconsistencies: their continued existence creates overlaps and fragmentation in treaty relationships and poses interaction challenges (particularly with newer treaties).

Countries have numerous options for modernizing their stock of old-generation treaties. Determining which reform option is “right” for a country in a particular situation requires a careful and facts-based cost-benefit analysis, while addressing a number of broader challenges.

This IIA Issues Note presents 10 options to reform old-generation treaties that countries can adapt and adopt in line with their specific reform objectives.