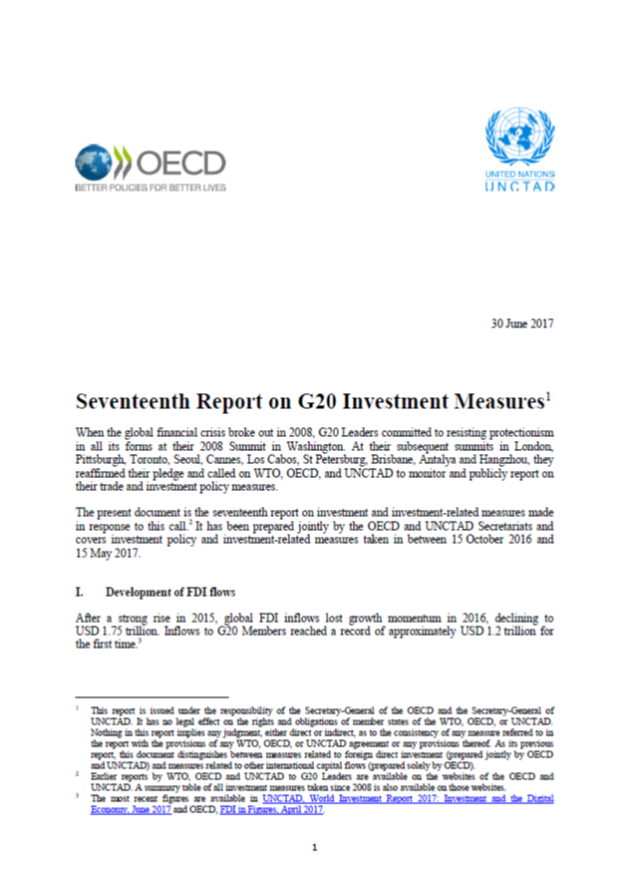 The joint UNCTAD-OECD Report indicates that, for the first time in years, the regular inventory of G20 Members' investment policy measures records a relatively greater proportion of restrictions to international investment.

During the reporting period (from mid-October 2016 to mid-May 2017), seven G20 Members have introduced investment policy measures specific to foreign direct investment (FDI). Among those, four countries took liberalisation measures in a variety of sectors. On the other hand, two countries restricted certain outward investment for public policy reasons and one country introduced a cap on foreign capital participation in payment transaction processing.

The Report cautions that, given the relatively low number of FDI-related policy measures that were taken in the reporting period, it is too early to interpret the comparatively higher ratio of restrictive measures as foreshadowing a trend. Nonetheless, these findings should focus policymakers’ attention to the commitments by G20 Leaders in favour of an open world economy, the promotion of global investment, and the thrust of the G20 'Guiding Principles for Global Investment Policymaking', which call for open, non-discriminatory, transparent and predictable conditions for investment.