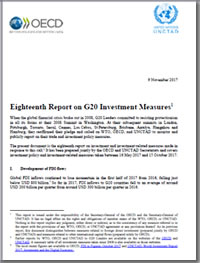 The joint UNCTAD-OECD Report indicates that investment policy measures taken by G20 Members were mostly geared towards greater openness for foreign investment. At the same time, there has been an increase in policies related to national security.

The findings for this reporting period testify that G20 Leaders are committed to promoting an open, transparent and conducive policy environment for investment, while the investment flows remain volatile. Regular policy monitoring and public reporting in this area are important and should be continued.