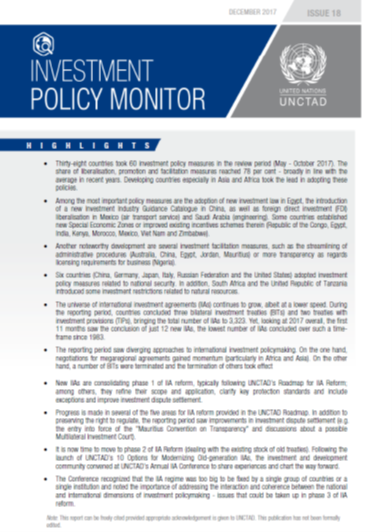 The Monitor finds that 38 countries took 60 investment policy measures between May and October 2017. The share of liberalisation, promotion and facilitation measures reached 78 per cent - broadly in line with the average in recent years. Developing countries especially in Asia and Africa took the lead in adopting these policies.

Among the most important policy measures are the adoption of new investment law in Egypt, the introduction of a new Investment Industry Guidance Catalogue in China, as well as FDI liberalisation in Mexico (air transport service) and Saudi Arabia (engineering). Some countries established new Special Economic Zones or improved existing incentives schemes therein (Republic of the Congo, Egypt, India, Kenya, Morocco, Mexico, Viet Nam and Zimbabwe).

The reporting period saw diverging approaches to international investment policymaking. On the one hand, negotiations for mega-regional agreements gained momentum (particularly in Africa and Asia). On the other hand, a number of BITs were terminated and the termination of others took effect.

New IIAs refine their scope and application, clarify key protection standards and include exceptions and improve investor-State dispute settlement clauses. The reporting period also saw the entry into force of the "Mauritius Convention on Transparency" and discussions about a possible Multilateral Investment Court.

The investment and development community convened at UNCTAD’s Annual IIA Conference to share experiences and chart the way forward on reforming the existing stock of old treaties following the UNCTAD’s 10 Options for modernizing old-generation IIAs. The Conference recognized the importance of addressing the interaction and coherence between the national and international dimensions of investment policymaking - issues that could be taken up in the next phase of IIA reform.