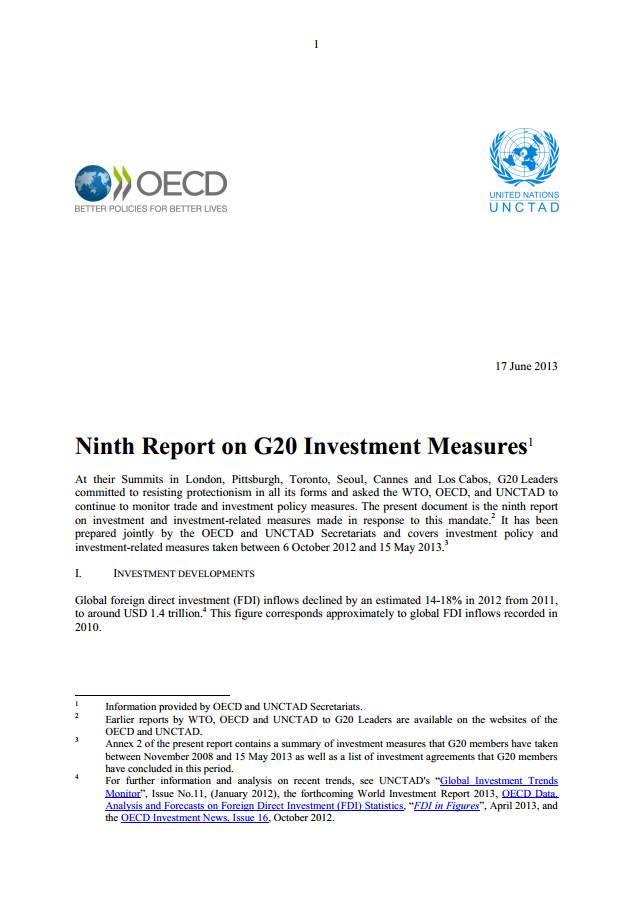 On the whole, G20 members have continued to honour their pledge not to introduce new restrictive policies for international investment. Almost all new investment policy measures that G20 members adopted during the reporting period tended to eliminate investment restrictions, and to facilitate inward or outward investment.

However, formal policy changes through the adoption of laws and regulations are not the only way in which governments influence – and at times discourage – international capital flows, including foreign direct investment. Individual administrative decisions with regard to specific foreign investment projects (for instance, economic benefits tests or national security-related investment reviews) also influence capital flows. In addition – as witnessed during this reporting period – governments may send public signals that they have unfavourable views of certain foreign investment projects. Such forms of intervention are not captured by this report, as a consistent and complete reporting on these measures is not possible. Nonetheless, such action may have a chilling effect on specific investment projects and, more generally, on trust in fair and transparent treatment of foreigninvestors.

G20 Leaders should therefore bear in mind that the rather encouraging findings in this report on thedevelopment of their formal investment-related policies of general application do not present a complete picture of broad policy measures regarding international capital flows and that their commitment to resist protectionism in all its forms also covers individual administrative decisions that involve significant discretion in reviewing foreign investment projects and informal means for stifling international investment.