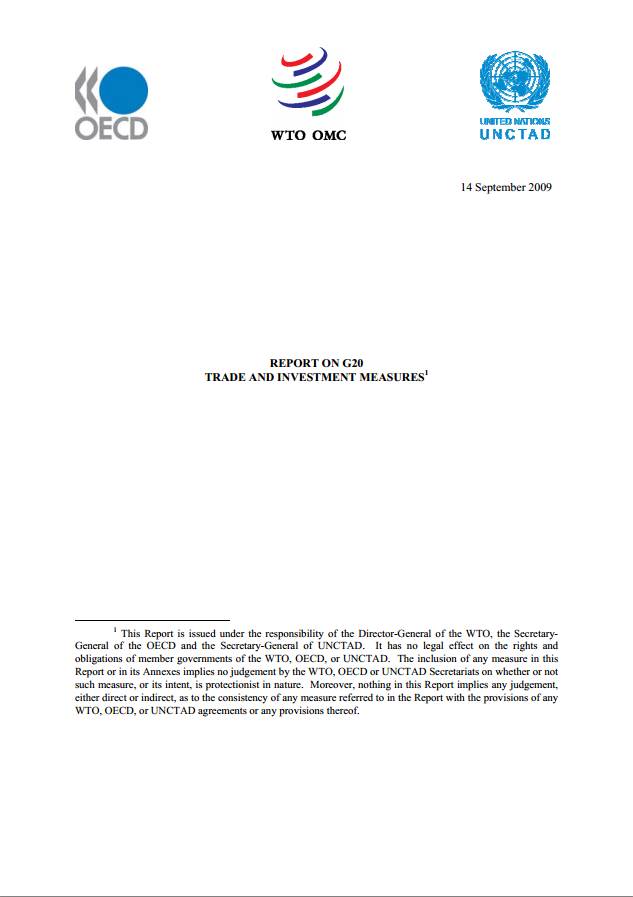 This Report is issued under the responsibility of the Director-General of the WTO, the Secretary-General of the OECD and the Secretary-General of UNCTAD. It has no legal effect on the rights and obligations of member governments of the WTO, OECD, or UNCTAD. The inclusion of any measure in this Report or in its Annexes implies no judgement by the WTO, OECD or UNCTAD Secretariats on whether or not such measure, or its intent, is protectionist in nature. Moreover, nothing in this Report implies any judgement, either direct or indirect, as to the consistency of any measure referred to in the Report with the provisions of any WTO, OECD, or UNCTAD agreements or any provisions thereof.

The sharp contraction of the global economy that began in 2008 and accelerated in the first quarter of 2009 has impacted deeply on international trade and investment. The volume of world merchandise trade is projected to contract in 2009 by 10 per cent, and foreign direct investment (FDI) flows, which fell by 14 per cent in 2008, are projected to plummet even further this year by 30-40 per cent.

There is no indication of a descent into high-intensity protectionism as a reaction to the crisis, involving widespread resort to trade or investment restriction or retaliation. This suggests that G20 members and other governments have so far succeeded in managing the political process of keeping domestic protectionist pressures under control.

In the area of investment, the thrust of G20 policy changes has been, for the most part, towards greater openness and clarity, with a substantial number of the policy changes found to be directed at facilitating international investment and financial flows. G20 members also continued to conclude international investment agreements. At the same time, some G20 Governments have established support schemes that can discriminate against foreign-controlled companies or raise barriers to outward investment flows.

In the area of trade, there has been policy slippage since the crisis began and this has continued since the G20 London Summit in April 2009. Some G20 members have raised tariffs and introduced new non-tariff measures to protect domestic production in certain sectors, notably steel and motor vehicles. G20 members have continued to use trade defence mechanisms, in these and other sectors too. Two G20 members have re-introduced agricultural export subsidies for the dairy sector, measures that are generally acknowledged to be among the most highly trade-distorting. The fiscal and financial packages that have been introduced to tackle the crisis favour the restoration of trade growth globally and they are to be welcomed, but some of them contain elements – such as state aids, other subsidies and "buy/lend/invest/hire local" conditions – that favour domestic goods and services at the expense of imports.

Overall, the incidence of new trade and investment measures taken in response to the current crisis is not out of line so far with what happened during previous downturns in economic activity. WTO rules and its dispute settlement mechanism continue to provide a strong defence against protectionism as do OECD rules and peer monitoring and UNCTAD's monitoring of national and international policies for foreign investment. However, trade and investment policy risks remain and are likely to continue to do so until economic recovery is well-rooted and job and business opportunities have started to grow again.

The main risk is that G20 members will continue to cede ground to protectionist pressures, even if only gradually, particularly as unemployment continues to rise. The danger is of an incremental build-up of "sand in the gears" of international trade that could aggravate the contraction of world trade and investment and undermine confidence in an early and sustained recovery of global economic activity. G20 members should reflect on the contradiction of using any measures that restrict or distort trade or investment, and therefore that tax production and incomes, at the same time as the main thrust of their policies to overcome the crisis is geared to expanding aggregate demand. "Best practice" in current circumstances, to accompany financial and fiscal stimulus, is to reduce trade and investment restrictions so as to cut costs and prices worldwide. Where subsidies can be afforded, their full value as a stimulus for economic activity will come from targeting them at consumption, not production, with consumers free to choose internationally the goods and services that they buy.

The second risk is that measures taken temporarily to try to protect jobs and business profits now from the effects of the crisis will create a legacy of uncompetitive industries and sectoral over-capacity that will continue to generate protectionist pressures even after economic activity picks up again. The failure of trade restrictions and subsidies to provide effective industrial support in the 1970s and 1980s, and the long-term costs imposed on world trade until they were unwound during the Uruguay Round, need to be recalled. The same mistakes must not be made again.

A collective decision by G20 members to bring the Doha Round to a rapid conclusion would be well-received by other WTO Members and send an unambiguous signal that protectionist measures are not the solution to this crisis and that measures taken to combat the crisis will be quickly unwound. Concluding the Round will substantially narrow the scope for introducing new trade restrictions or raising existing ones; where WTO disciplines are currently weak, or their coverage is limited, governments face greater difficulties to resist protectionist pressures. It would also generate a new stimulus package for the world economy that would not depend on public finances and that would benefit directly developing countries, who as a group have been by far the worst affected by the crisis.

Pending the conclusion of the Doha Round, the "do no harm" principle points to the value of a strong commitment by G20 members not to introduce new trade restrictions and trade-distorting subsidies, including those that are regarded as being consistent with WTO rules. The most recent Declaration at the L'Aquila Summit on 8 July 2009 is a welcome development by "...stressing the importance of fully adhering to the standstill commitment and the commitment to rectify protectionist measures adopted in London to avoid further deterioration of international trade, including refraining from taking decisions to increase tariffs above today's levels".