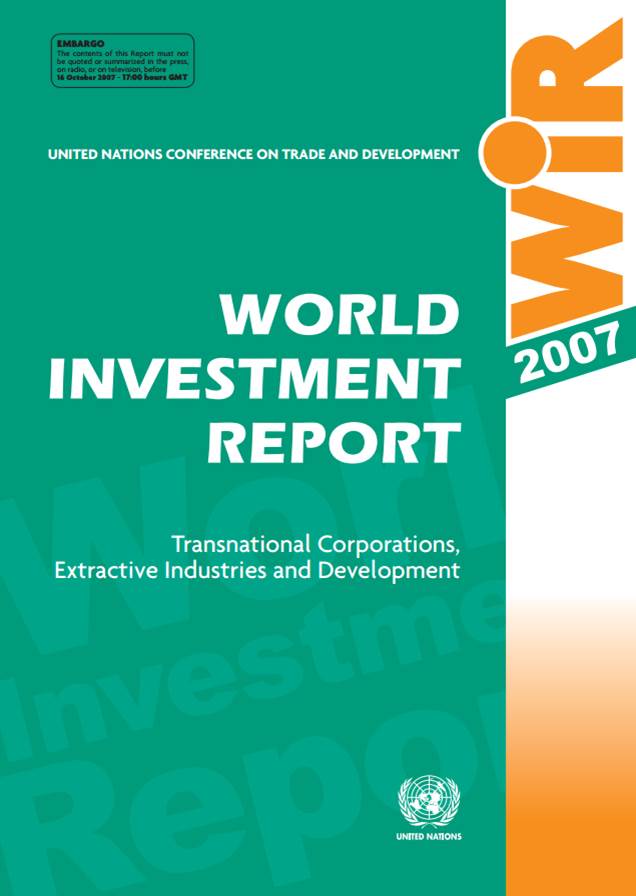 The Report analyses the latest trends in foreign direct investment (FDI) and puts a special focus in 2007 on the role of transnational corporations (TNCs) in the extraction of oil, gas, and metal minerals.

Higher prices for many minerals have led to renewed investor interest in the extractive industries. TNCs, including some of the world´s largest corporations, play a key role in the mining of metals and in the extraction of oil and gas. Privately owned TNCs dominate the harvesting of metal minerals, while State-owned companies from developing and transition economies are key players in oil and gas. Many such State-owned firms are emerging as TNCs in their own right.

Drawing on unique data, the Report examines TNC involvement in the extraction of mineral resources and maps the key countries and companies. It also discusses how the forces driving investment change as raw materials progress up the "value chain" to become finished products, and as different types of companies participate. In view of recent discussion of the so-called "resource curse," the Report explores how the participation of TNCs may help or hinder long-term, broad-based economic development in developing countries -- the best approach for reducing poverty and raising living standards. It considers how energy and mineral extraction can help governments achieve such aims.

As in previous years, WIR07 presents the latest data on FDI and traces global and regional trends in FDI and in international production by TNCs. Global FDI inflows rose in 2006 for the third consecutive year. This growth was shared by all major country groups: developed countries, developing countries and the transition-economies of South-East Europe and the Commonwealth of Independent States . Rising demand for commodities was reflected in a steep increase in natural resource-related FDI, although the services sector continued to be the dominant recipient of FDI. Among the developing regions, FDI inflows to subregions such as North Africa, sub-Saharan Africa, West Asia, South Asia, East Asia, and South-East Asia were at record levels, as were foreign investment flows to transition economies.