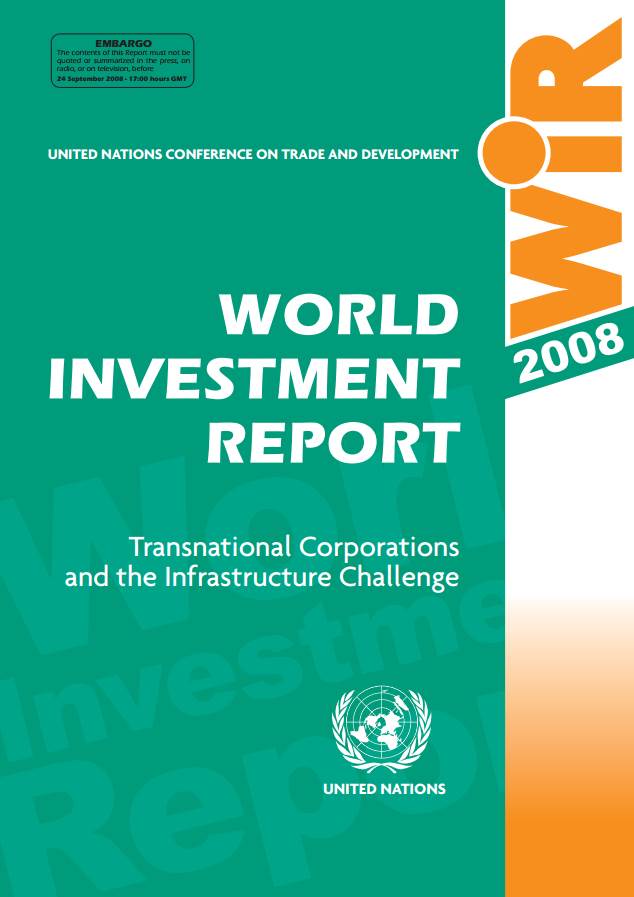 The Report analyses the latest trends in foreign direct investment (FDI) and has a special focus in 2008 on the role of transnational corporations (TNCs) in infrastructure development.

Infrastructure - especially electricity, telecommunications, transport, and water - is important for all economies. It provides goods and services crucial for competitiveness. Affordable electricity and drinking water are also important for raising living standards. Many low-income countries need huge investments to improve infrastructure but lack the domestic resources to fund them. Investments from TNCs, along with other forms of TNC involvement, are one way of addressing the shortfall.

The Report maps the investments of infrastructure companies worldwide and in developing countries and explores how TNC participation in infrastructure has increased since the early 1990s, although from a low level. It also discusses how developing-country firms have become prominent investors in some infrastructure industries - and the implications of their foreign activities. The Report further explores how the participation of TNCs mobilizes financial resources for infrastructure investment and how these activities affect industry performance. It highlights the complex policy challenges facing developing countries seeking to use TNCs to spur improvements in such fields as transport and electricity supply and stresses the need for active support of such countries by their development partners.

As in previous years, WIR08 presents the latest data on FDI and traces global and regional trends in FDI and in international production by TNCs. Global FDI inflows continued to rise in 2007 and reached a new record despite the onset of the financial and credit crisis. All the three major groups of economies - developed countries, developing countries, and the transition economies of South-East Europe and the Commonwealth of Independent States (CIS) - and virtually all regions saw continued growth in FDI. The crisis seems to have affected FDI flows in 2008, however, and TNCs recently appear to have become more cautious in their investment plans.