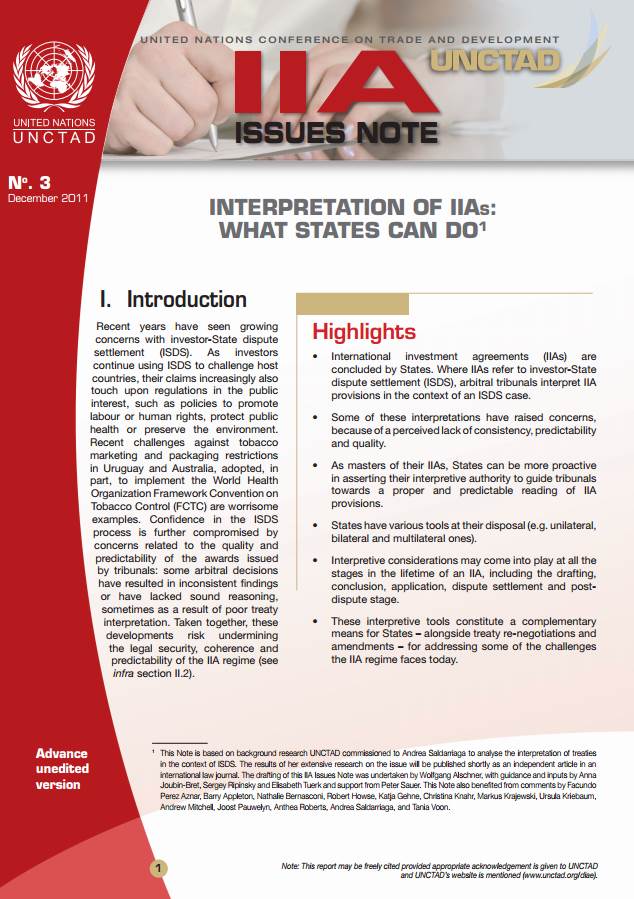 Recent years have seen growing concerns with investor-State dispute settlement (ISDS). As investors continue using ISDS to challenge host countries, their claims increasingly also touch upon regulations in the public interest, such as policies to promote labour or human rights, protect public health or preserve the environment. Recent challenges against tobacco marketing and packaging restrictions in Uruguay and Australia, adopted, in part, to implement the World Health Organization Framework Convention on Tobacco Control (FCTC) are worrisome examples. Confidence in the ISDS process is further compromised by concerns related to the quality and predictability of the awards issued by tribunals: some arbitral decisions have resulted in inconsistent findings or have lacked sound reasoning, sometimes as a result of poor treaty interpretation. Taken together, these developments risk undermine the legal security, coherence and predictability of the IIA regime.

This note is divided into three parts. Part one describes the shared authority of States and tribunals in the interpretive process, and sketches some of the current deficiencies in investment arbitration. It advocates a greater involvement of States in the interpretive process, but also considers limitations to a more proactive role of the contracting parties. Part two presents international law principles of interpretation and explains how they can guide States in their actions towards fostering a “better” (i.e. more rigorous, consistent and coherent) interpretation of IIAs. Finally, part three sets out different tools States may employ to guide arbitral tribunals in the interpretation of IIAs.