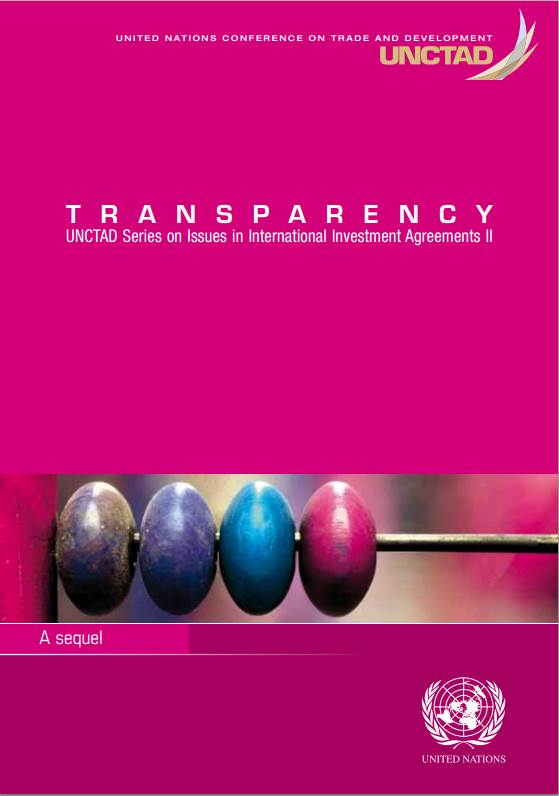 The aim of this paper is to update the first edition of UNCTAD's Pink Series paper on transparency. It seeks to examine:

i. The way in which traditional transparency issues have been addressed in international investment agreements (IIAs) since 2004,

ii. The emergence of investor responsibilities as a consideration within transparency issues, and

iii. The introduction of a transparency dimension into investor-State dispute settlement (ISDS).

In analysing these issues, this paper outlines possible sustainable development implications of the different transparency-related formulations used in IIAs and points to some of the most progressive provisions that are appearing more frequently in investment instruments.

In addition to these issues common to the 2004 volume and this Sequel, this study identifies significant areas of change in stakeholder approaches to the issue of transparency. The first is the emergence of investor responsibilities as a consideration within the transparency context. The second is the emergence of transparency issues within ISDS. This study focuses particularly on transparency in ISDS and the implications of this conceptual shift manifested in the dispute resolution context. This study also considers transparency concerns as a component of a more generalised interest in the impact of procedural matters in ISDS. A key issue is the appearance of transparency and public participation-related provisions in recent IIAs and the sustainable development implications of such approaches. This study is structured as follows:

Introduction provides an overview of the role of transparency in facilitating international investment.

Section I presents a synopsis of:

Section II expounds on the topics introduced in Section I and provides a review of current treaty and arbitral practice with respect to transparency in each of these contexts.

Section III contains a series of policy options available to. In this final section, the study also briefly considers the potential implications of those options for a host State’s sustainable development. In particular, it identifies those provisions that have a greater capacity to strengthen the development dimension of IIAs.

It is hoped that this will assist the negotiator in deciding whether to include transparency provisions in IIAs and in ISDS provisions, and, if so, which formulations to include.