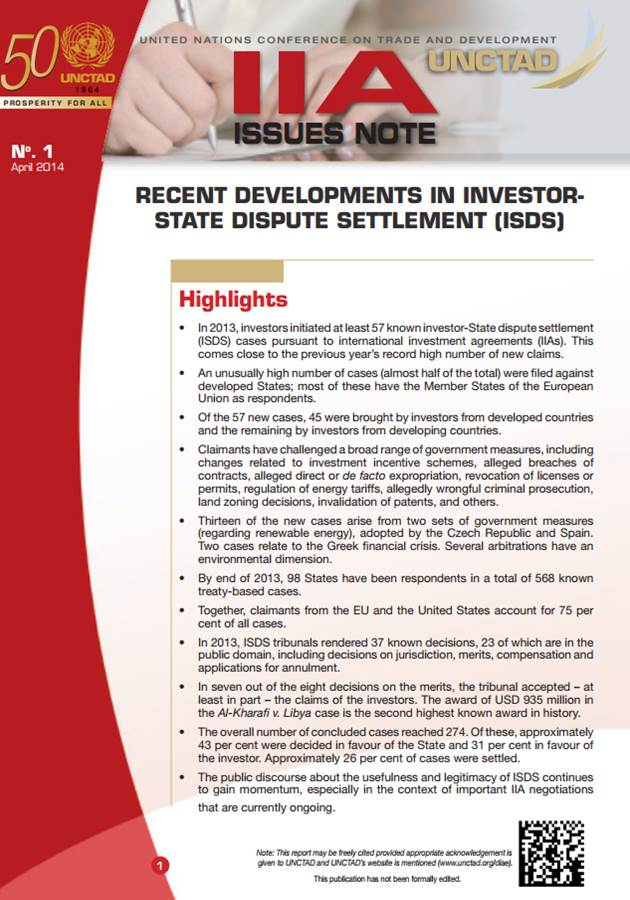 Investment arbitrations against host countries continued to grow rapidly in 2013, reaching the second highest number of new cases in history. According to the Note, 57 new cases were initiated in 2013, just below the record number of new claims recorded in 2012.The total number of known treaty-based cases reached 568. The overwhelming majority of these cases (85%) have been brought by investors from developed countries. Together, claimants from the EU and the United States account for 75% of all disputes.

In 2013, investors challenged a broad range of government measures, including changes related to investment incentive schemes (such as 13 cases against Czech Republic and Spain regarding the changes in the renewable-energy policies); alleged breaches of contracts; alleged direct or de facto expropriation; revocation of licenses or permits; regulation of energy tariffs; allegedly wrongful criminal prosecution; land zoning decisions; invalidation of patents; and legislation relating to sovereign bonds.

ISDS tribunals issued 37 known decisions last year, 23 of which are in the public domain. The award of US$935 million in the Al-Kharafi v. Libya case ranks as the second highest known award ever.
By the end of 2013, the overall number of concluded cases reached 274. Of these, approximately 43 per cent were decided in favour of the State and 31 per cent in favour of the investor. Approximately 26 per cent of cases were settled.

Finally, the growing number of ISDS cases and the broad range of policy issues they raise have turned ISDS into a "hot topic". The public discourse about the usefulness and legitimacy of ISDS continues to gain momentum, especially in the context of important IIA negotiations that are currently taking place.