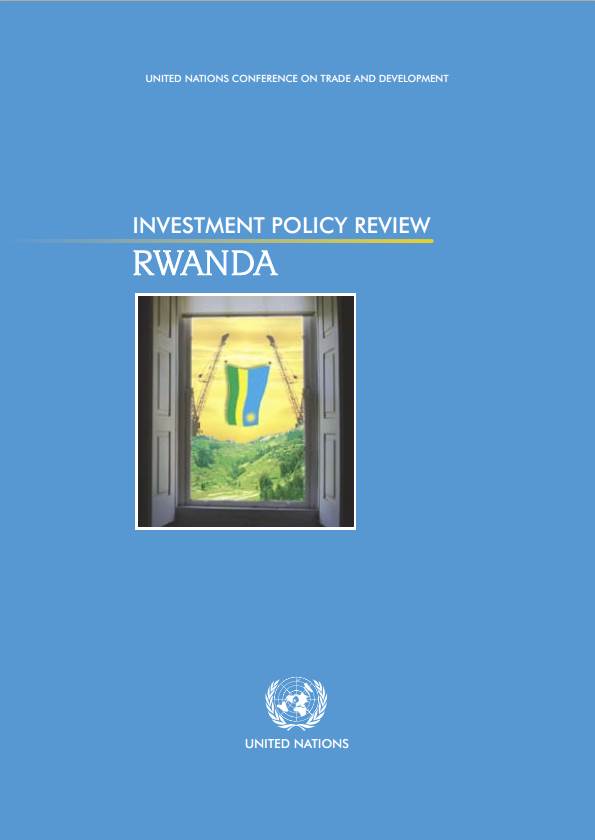 The IPR of Rwanda was published in 2006. The Review assessed the investment environment and sketched the building blocks of a FDI strategy to meet the country’s development objectives. On this basis, it recommended a concerted and well-targeted effort by the Government to reach the status of centre of excellence in soft infrastructure and governance by 2010. The IPR suggested designing a realistic FDI strategy recognizing the country’s strengths and weaknesses, focusing on key infrastructure constraints, global market access, domestic market size, skills attraction and the development of selected strategic sectors.

In 2011, UNCTAD conducted a review to assess the extent to which the IPR recommendations had been implemented. It found that, over the five-year period starting with the publication of the IPR (2006–2010), annual FDI inflows into Rwanda averaged $75 million, almost 8 times more than in the pre-IPR period of 2001–2005 ($10 million). The rise in FDI reflects the major improvements in the investment environment initiated by the Government throughout the period, the country’s openness towards FDI and enhanced regional integration.

The Government of Rwanda took full ownership of the strategic thrust proposed in the IPR, and many specific actions undertaken are directly in line with the recommendations of the Review. Out of the 32 IPR recommendations monitored, 15 have been fully or largely implemented, and in 10 of these, implementation actually exceeded expectations. It is also worth stressing that full membership to the EAC was attained in 2007, well ahead of the 2010 target referred to in the IPR. Since then, the country has become a very active EAC member, pushing for the harmonization of policy and undertaking measures with partners in various areas.

Other reports: Report on the Implementation of the Investment Policy Review of Rwanda