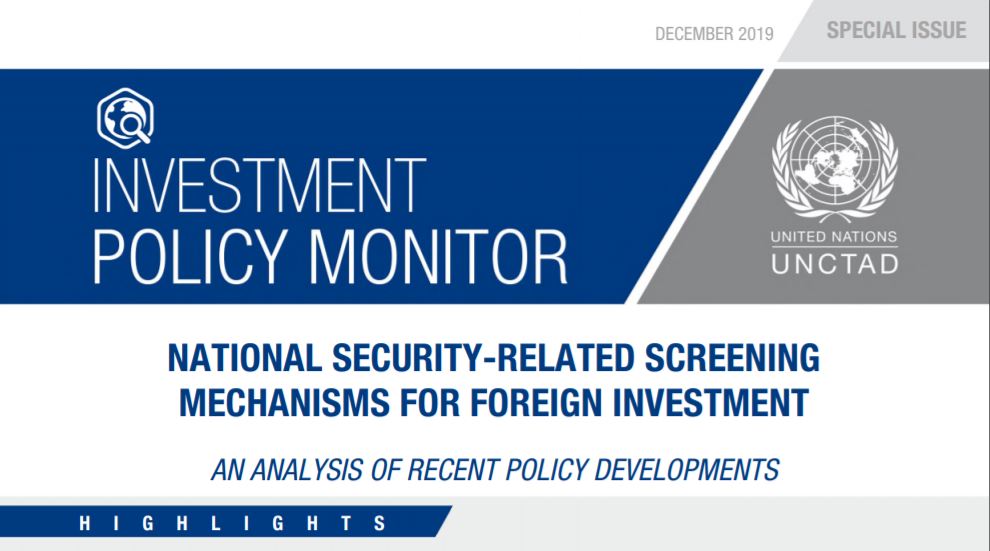 During the Special Session of the D-8 Commission Meeting, UNCTAD presented the key elements of the joint D-8 - UNCTAD Guiding Principles for Investment Policymaking.

The IPA Observer highlights the critical role of investment promotion agencies during the COVID-19 crisis, how they have transformed and which changes are likely to stay.

In recent years numerous countries have introduced new or reinforced existing mechanisms and procedures specifically dedicated to national security-related investment screening. From January 2011 to September 2019, at least 13 countries introduced new regulatory frameworks. In addition, at least 45 significant amendments to existing screening systems were recorded in 15 jurisdictions in this period. UNCTAD identified 28 jurisdictions that have such a distinct mechanism. Moreover, the European Union established an FDI screening cooperation system between the European Commission and the EU member states.

Also, the number of cases, where foreign investment has been blocked or did otherwise not materialize for national security reasons is rising. UNCTAD identified at least twenty instances of planned foreign takeovers with a value exceeding $50 million that failed for these reasons in the period from 2016 to September 2019. The aggregated value of these transactions amounts to more than $162,5 billion – with the lion’s share falling into the last two years. For example, in 2018, the value stood at $150,6 billion – which was equivalent to 11.6 % of the total global FDI flows in that year. These figures only reflect those cases and transactions for which information is publicly available.