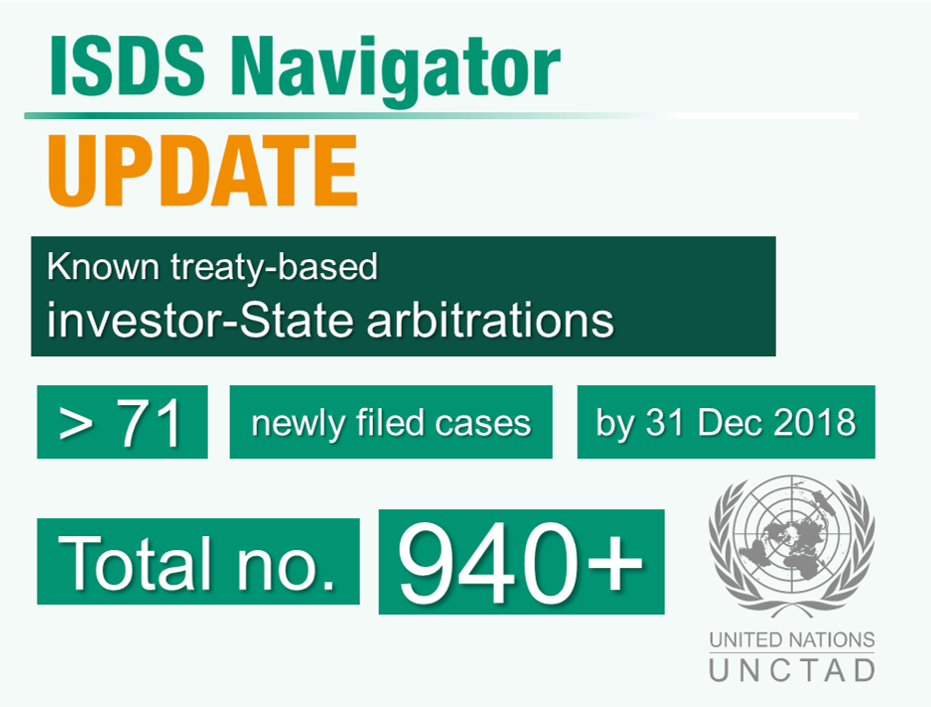 Registration for the seventh World Investment Forum, scheduled to take place from 18 to 22 October 2021, is now open.

UNCTAD has updated its Investment Dispute Settlement Navigator. The Navigator is now up-to-date as of 31 December 2018.

The number of treaty-based investor-State dispute settlement (ISDS) cases filed in 2018 remained as high as in the previous three years.

Key findings of the update:

Based on newly revealed information, the number of known cases for 2017 was adjusted to 75. Additional cases have also surfaced for previous years.

As of 31 December 2018, the total number of known treaty-based arbitrations against host countries has reached 942.

The 71 known ISDS cases recorded for 2018 were brought against 41 countries. Colombia and Spain were the most frequent respondents, with 6 and 5 cases each. Three countries – Belarus, Qatar and Rwanda – faced their first (known) ISDS claims.

Investors from the United States and the Russian Federation initiated the most cases with 15 and 6 cases each.

Information about the claims has been compiled based on public sources and specialized reporting services. As some arbitrations can be kept fully confidential, the actual number of disputes filed this year and in previous years is likely to be higher.

The update of the ISDS Navigator covers new cases as well as new information on existing case entries. You can browse the ISDS Navigator to find information on the subject matter, the status/outcome of the arbitral proceedings, awards and decisions issued by tribunals, breaches of IIA provisions alleged and found, amounts claimed and awarded, and arbitrators serving on the tribunal.